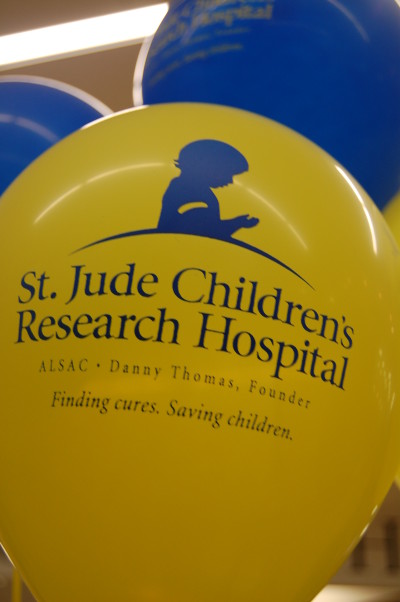 Did you see all the bubbles outside Gill Center the other Friday night? It could have only meant one thing…Up ‘Til Dawn Finale Event! McDaniel College helped St. Jude’s Children’s Hospital “Fish for a Cure” at the Up ‘Til Dawn finale event. It all started on Mar. 25, 2011 at 6 p.m. and ended on Mar. 26, 2011 at 6 a.m.

What kept everyone awake for so long? Local bands Annedel and Railaway took the stage along with McDaniel College’s  improv group, Danger Sauce. There were also a number of games, including cornhole, a velcro wall, an inflatable moon bounce obstacle course and basketball.

Paris Fossa, a senior and the Executive Director of Up ‘Til Dawn, stated her favorite game this year was Fear Factor.

She said, “It is new this year. It involves a combination of spam, juice, tomato sauce and green beans.” The brave participants included Emma Adams, Anthony Gordon and Gillian Gaynor. The winner with iron stomach turned out to be Alpha Sigma Phi’s Anthony Gordon.

There were raffles all through the night which included numerous gift cards, movie tickets, CDs, DVDs, a Lacoste watch and Juicy Couture clutch. Not enough? Scott Forrester won the grand prize, which was an iPad.

To be entered in the iPad drawing, students had to write fifty letters at the letter-writing event in the fall. Here at McDaniel, it is mandatory for all Greek organization members to write the fifty letters, which allowed them to have free admission into the finale event.

The total amount raised was $31,555. Paris Fossa stated, “I gained a legitimate love for St. Jude’s. The fact that any patient and their family can go to Tennessee and will never see a bill is a great thing. They will not accept insurance or anything. Everything is free.”

Select members of the Executive board recently had the opportunity to go to Tennessee and tour the St. Jude’s Children’s Hospital facility. It showed them that their hard work and dedication throughout the year was going towards a great cause that directly affected others well-being.

Participants at the finale event did not just get to hear the Executive Board talk about how great St. Jude’s, but saw firsthand how a patient, her mom and her sister were helped. She is a local girl who was diagnosed with a rare cancerous brain tumor at the early age of three. At first, her mom was very skeptical about going to Tennessee, but once they were there, everything was outstanding.

Being able to hang out and lift up the spirits of this child was worth the time and effort put into the event.

Sophomore Christen Brown, the Public Relations chair of Up ‘Til Dawn, showed her love for the cause by saying, “It takes a lot of hard work to get everything together, but in the end is worth it.”

Even President Roger Casey and his wife event made an appearance at the event. Next year, be on the lookout for Up ‘Til Dawn and come out and support this organization that directly helps patients and families in a time of need.

A Different Kind of Mail