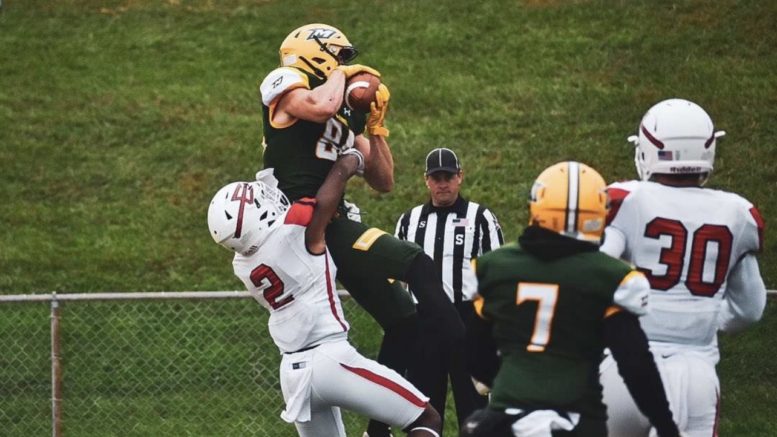 The McDaniel Football Team celebrated a win against Dickinson on October 1, at the Homecoming Game. The Green Terrors beat Dickinson, with a final score of 21-13.

Despite the cold and cloudy weather, students and alumni came out to support the Green Terrors and show their school spirit.

Athletes reflect on their experience and emotions during the game.

“The homecoming game was a great experience, being a sophomore in the program, I’m still somewhat new to things. When I felt the atmosphere on the field, I knew everyone was ready to play, under whatever the circumstances of weather,” sophomore quarterback Eric Grinwis said.

Grinwis recognizes the importance of alumni when it comes to their ability to play football at McDaniel, but Grinwis didn’t feel any extra pressure knowing alumni were watching.

“McDaniel is known for the huge tailgate [atmosphere] and large number of alumni, it was huge; but pressure is something you create yourself. Grinwis said. “The alumni allow us the opportunity to play but they’re just another spectator to the game.”

One of Grinwis’s favorite plays of the game was done by junior wide receiver, Hunter Sigler, when he scored his first touchdown. Sigler recalls the excitement he felt after scoring, knowing his friends and family were watching in the stands.

“It felt great scoring my first touchdown of the game! Especially since it was my first of the season and lots of my friends and family were there to see it and celebrate it with me,” Sigler said.

Sigler is thankful for the support he had on the field from his teammates.

“My teammates that were on the field at that time did their job and helped contribute to that first touchdown, so I want to thank them for giving the maximum effort that they could give,” Sigler said.

Sigler appreciates having the ability to play and celebrate the historic aspects of McDaniel.

“The homecoming game is different because you are playing for your school and all of the history behind it,” Sigler said. “For me personally, the bigger crowd and alumni doesn’t add more pressure, it just makes the environment more electric.”

Any win of the football team is thrilling for the players, but the special day made it even more meaningful.

“When the final whistle blew and we had won the game it was a feeling like no other; especially since it had been so long since we last won a homecoming game or beat Dickinson,” Sigler said.

Students on the hill value the environment tailgating creates on campus. Homecoming allows students to see the true community a football game brings to McDaniel.

“It’s when we all get together and enjoy being green terrors no matter our backgrounds and differences,” senior Stephani Portillo said. “It’s where we get to really witness the family environment here on campus.”

“Everyone is welcoming, caring, offering food, and laughing,” Portillo added.

Other students agree that there was a vastly different feel at the homecoming game compared to other football games.

“The energy and crowds of normal games compared to homecoming is drastically different because of the pressure the crowd gives, it definitely gets much more energetic,” junior Shaun Bolten said.

Apart from the school spirit for the team, students find it easy to meet new people while watching the game.

“There were tons of students to talk to and I met a few new friends,” Bolten said.

As the game went on and the temperatures remained chilly, students continued to cheer on their peers on the field.

“At first, I was kind of regretting going to the homecoming game because it was a cold and gloomy day,” Portillo said.

She explains the difference she felt as she noticed the enthusiasm of others.

“However, once everyone started showing up my mood changed completely and I remembered why I went… [as soon as] I saw everyone decked out in their green and gold apparel, the energy changed,” Portillo added.

Students appreciate how many people continue to support McDaniel, no matter if they are a student, a family member, or an alumni.

“Homecoming games are different because everyone shows out. Alumni and parents come and there’s food, just a lot of good vibes,” senior Madi Cordell said.

Although most students watch the game from the grassy hill behind the goal post, senior Collin Beattie experienced the game on the sidelines. Beattie is a photographer on the football team’s PR team. He follows the team through all practices, walkthroughs, and home games.

“The on-sideline experience is always fun, being so close to the action. I always have a front row seat,” Beattie said.

When comparing this year’s game to last years, Beattie is thankful the rain held out.

“Last year’s homecoming wasn’t great, because I worked outside in the heavy rain, under a video camera, and I couldn’t really do my job because of the rain. I went back to my place completely soaked,” Beattie recalled.

Beattie is thankful for the opportunity to be watching, supporting, and working on the sidelines.

“Homecoming games are different. I feel like worlds collide every time I get to meet people from McDaniel’s past. From the sideline, it feels like winning bragging rights, in a way,” Beattie said.

The McDaniel community is grateful to witness a win during the unique game of the season. Players are appreciative of their coaches and their openness in allowing players to be themselves.

“A very big reason we won was for head coach Demarcus White allowing us as players to really be ourselves on the field within reason,” Grinwis said.

“Coach White, quarterback coach Matt Johnson, and every other staff member play key roles in all of our success, and all the other success to come throughout the rest of the season,” Grinwis added.