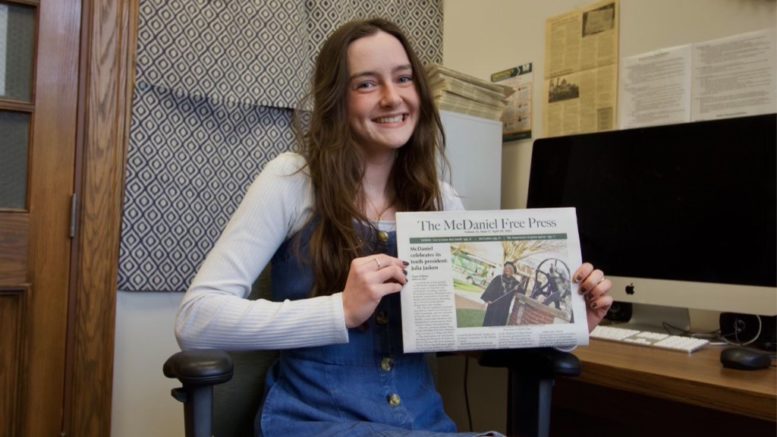 To Ciara O’Brien, it was never about the achievement of gaining a leadership position; it was about doing what she loved and having a positive impact on others. She gave off positive energy to every person she met on campus. Through sharing her passion and drive, she showed people how putting their values first can bring them the most happiness. Whether it was helping a new Free Press writer find a story they were excited about, inviting people to try yoga with her, or helping others find a new book they love through a book drive, O’Brien gave people the path to write their own story.

Majoring in Writing & Publishing, with minors in Environmental Studies and Marketing, O’Brien graduates this Spring, 2022. On campus, she was a leader in more ways than one, and she has helped lead others in many of her fields of interest.

Despite her leadership positions now, O’Brien reflects on her freshman year and lack of being able to get involved.

“I wish that I could tell my freshman self to not be so afraid. I wish I got out of my own way a little bit more,” O’Brien said.

O’Brien says she felt held back freshman year, and did not get involved in as much as she wanted to.

“I wasn’t involved on campus at all freshman year. I wrote three articles for the Free Press, but I wasn’t in any clubs, I didn’t have any jobs, and I only had a few friends,” O’Brien said.

Now O’Brien, Editor-in-Chief of the Free Press, Co-Founder and President of McDaniel Yoga Club, and President of Sigma Tau Delta, had no idea she wanted any leadership positions and did not decide she truly wanted to get involved until her sophomore year.

“When I got back to school in the fall for sophomore year, I realized I wasn’t happy with where I was. I wanted to do more, I wanted to meet new people, I wanted to get more involved in the things that I really care about,” O’Brien said.

She did exactly that. At the beginning of her sophomore year, O’Brien was promoted to the Free Press Editorial Staff. She also became an advanced peer tutor in the writing center.

Apart from writing, she is an active member in her sorority– Phi Mu Fraternity, where she held leadership positions including secretary and historian, and Alpha Phi Omega, the National co-ed Service Fraternity. She was involved in Contrast Literary Magazine and served on their editorial board in 2020 and 2022. She is also a member of Trumpeters and Omicron Delta Kappa, the two leadership honors societies on campus. No matter the organization, O’Brien finds a way to make the most of her involvement.

She emphasizes how important it is to get involved no matter what year you are in; she affirms there is never a time where it is too late to get active on campus.

“It’s never too late to get involved. I helped start McDaniel Yoga Club in the middle of junior year,” O’Brien said.

O’Brien’s involvement in the Free Press started her freshman year.

“I wrote my first article like the second week of freshman year, I was so excited to be part of the Free Press,” O’Brien said.

As O’Brien reflects on her time writing and editing for the Free Press in her senior year, she is grateful to have run the newspaper for so long.

“Being involved on campus has been pretty all encompassing, especially with something big like the Free Press and doing it for two years;  it’s wild to think that half of my time in college has been spent running the newspaper here,” she said.

She has valued being a part of something she can watch grow and shape through time.

“It has been really cool to watch it grow and expand and change throughout the years, as leaders change, the college changes, especially through COVID-19,” O’Brien said.

She has found many unique fortunes that come with being a leader at a small school.

“It’s a lot more intimate. I’m really lucky that I’ve gotten to get to know the people in the organizations that I’m in on a pretty individualized level,” O’Brien said.

In the Free Press, she has put immense time and energy into understanding her staff and how they best work. By doing this, she is able to push people to pursue stories they are the most enthusiastic about.

O’Brien says the most rewarding part of being in the Free Press was being an editor. She enjoyed seeing the excitement on people’s faces when their stories got published or made the front page. Even throughout the writing processes of writers, she loved seeing people become more excited about their writing.

“I feel like one of the biggest parts about being an editor is being a cheerleader and helping people realize that what they are doing is important, good, and worth pursuing. Helping someone brainstorm an article or even rework their article… seeing that excitement is so rewarding. That makes it all worth it,” she said.

In her journalist work, she loves being able to tell people’s stories, as well as help people tell their own.

“I’ve always loved writing feature pieces about faculty, administration, and businesses downtown,” she said.“It’s really cool to see people get excited and passionate about sharing the things that they love with us and it’s very special that we get to tell that story for them.”

As her graduation draws near, O’Brien reflects on her favorite memories on the Hill. Her top three are sledding, teaching yoga for the first time, and a handful of McDaniel Live Music Club concerts.

“McDaniel Live Music Club concerts are some of the memories that I hold very fondly. I always had a really good time dancing with my friends,” she said.

Harvey Stone park is one of the places she will miss the most.

“Harvey Stone is where I taught yoga for the first time. I always go on walks there when the weather is nice enough. It’s always been a quiet place for me to clear my head at the end of the day and watch the cars drive by,” O’Brien said.

O’Brien is currently pursuing her 200 hour yoga teacher training certification. She has been consistently teaching yoga weekly for over eight months, and has had a consistent practice and loved yoga for the last seven years.

“I think that yoga has been an outlet for me when things are really stressful and tough. I always know that I have a home and safe space in yoga,” she said.

By starting a yoga club at McDaniel, she has been able to share this feeling with others.

“I liked getting to share that here and get people equally as interested and invested in it as me,” O’Brien said.

O’Brien notes her biggest role models on campus, who have helped shape her into who she is today. She says the English department has been a huge support system for her. She lists her biggest mentors on campus.

“Dr. Mary Bendel-Simso, she is so smart, and I want to be as smart as her one day,” O’Brien said.

“Dr. Kate Dobson is also very special to me. She was my advisor for my capstone, she’s always been a very big cheerleader for me… I want to be smart like her too,” she said.

She recognizes staff who have helped her outside of the classroom as well.

“I am so thankful for all of the help that the English department secretary, Kathy Edmondson, has given me with Free Press and Sigma Tau Delta. I definitely couldn’t have made it through without her,” O’Brien said.

Another one of O’Brien’s passions is sustainable food systems.

“Dr. Elly Engle in Environmental Studies has helped me find some things that I am really passionate about as far as food systems and agriculture. It wasn’t really until I took sustainable agriculture with her that I realized this isn’t just old men growing corn; this can be young and exciting and sustainable! and it can be me, too,” O’Brien said.

After graduation, O’Brien will intern at White Rose Farm Circle, helping them redesign their website and run their social media, all while hopefully getting her hands in the dirt.

After the growing season, she plans to get back to writing and find a publication to contribute to.

“I want to farm, write, and write about farming, amongst other things. I’m going to be doing a mix of all sorts of stuff! I feel very optimistic about the future,” she said.

O’Brien is thankful for her time at McDaniel and says it gave her a wonderful support system and the best of friends.

“McDaniel inspired me, and I gained two really important skills here: believing in myself and having the passion and the drive to pursue the things I care about. I am tremendously grateful for this place,” she said.