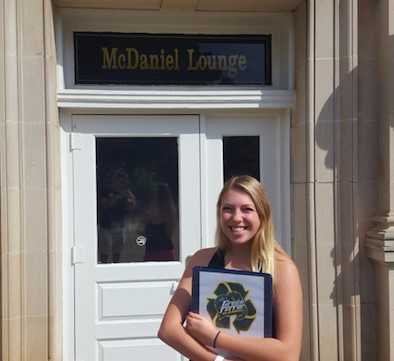 “We do not inherit the land from our ancestors; we borrow it from our children,” said Gina Piellusch, a member of the Green Revolving Fund committee, as she talked about the Native American proverb that drives her involvement with the new McDaniel organization. “The idea is that when you borrow something, you return it in just as good, if not better, condition than how it was given to you.”

During the 2015 academic year, McDaniel College received a $100,000 grant from the Jessie Ball DuPont Fund that is intended to kick-start a Green Revolving Fund (GRF) to aid the school with campus-wide energy conservation projects.

The Jessie Ball DuPont Fund is a national foundation that works with more than 330 different organizations. The eligibility of these organizations was determined exclusively by Jessie DuPont in her will. Since 1988, McDaniel College has been receiving funds from the DuPont organization that have been used to finance a wide range of on-campus projects.

The fund works with a total of 70 institutions of higher education, including 29 liberal arts schools. The DuPont Fund understands that these smaller colleges and institutions often become overwhelmed with the cost of maintaining their facilities, so they have set up an organization to fund projects for these institutions that save both money and energy.

“[Liberal arts colleges] are low-hanging fruits in terms of sustainability,” said Jason Scullion, an Environmental Studies professor here at McDaniel. “They have great opportunities to increase sustainability, but a relatively low amount of capital to invest.”

The best and most efficient way to help these schools, the Jessie Ball DuPont Fund established, is to provide a grant specifically developed to finance a Green Revolving Fund. The idea is that a school will finance green projects using this fund, which will in turn save the school money. The money saved from electrical bills is then reinvested into the fund with hopes of financing yet another project.

For McDaniel, this opportunity means that the school can finally act on projects that are in need of attention, as well as develop new ones through the involvement of the community: students, faculty, and staff. Just last year, McDaniel replaced the heating ventilation and air conditioning system in Western Maryland College Alumni Hall. This replacement was especially effective, as the old system had parts that were not only inefficient in terms of energy use, but also completely broken.

In addition to the recent replacement in Alumni Hall, many other improvements have been made across campus. Ranging from noticeable projects like a campus-wide energy efficient lighting system upgrade to less visible projects like improving the efficiency and power quality of the campus electrical distribution system, McDaniel has saved money that would likely have been spent on energy bills.

This fund at McDaniel is overseen by a committee made up of eight members: three staff members, three students, and two faculty members from different backgrounds. Applicants seeking funding for new campus energy conservation projects can submit requests through the McDaniel Portal—an online resource for members of the McDaniel community—which then gets reviewed by the group. The committee is even offering $300 to applicants who successfully submit an idea that makes it through the voting process.

“Most of the interest thus far being expressed is by students who are in my sustainability class, and Green Life,” said Scullion. “We encourage people from all specialties to apply; it’s not just a program designed for people with an interest in the environment.”

The committee’s hope is that by involving students, staff, and faculty, they can “move the needle,” as Piellusch has said, helping change students’ lives as well as make them interested in energy conservation at the same time.

“It’s a ripple effect, essentially,” said Piellusch. “If we continue to build a sustainable campus, the ideas being implemented will grow as will the students, who then move forward and build a culture of being green here on campus.”