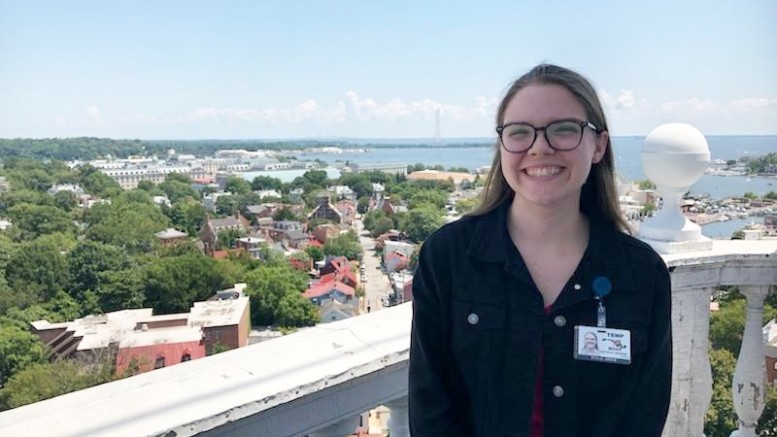 Although Pogue will be graduating with a history major and a literature minor, she was also involved in numerous other areas of campus.

She served in leadership positions for organizations such as Student Alumni Council, Alpha Phi Omega, Allies, and our very own Free Press. Pogue was also heavily involved in McDaniel’s music department as a member of McDaniel’s College Band, Jazz Band, Pep Band, and The Westminster Symphony Orchestra.

In addition to involvement in numerous clubs and organizations, Pogue also served as a first look facilitator during her sophomore year and the outreach librarian assistant for Hoover Library this past school year.

“I truly loved my time at McDaniel. I worried, as everyone does, my freshman year if I chose the right school, but I think that it was the best place I could have ended up,” said Pogue. “The thing that I enjoyed the most was finding another home both in the location of the Hill and in the community of friends I made here.”

One of Pogue’s favorite memories at McDaniel involves spending time with her friends.

“I have so many incredible memories of my time at McDaniel that it is hard to pick just one,” Pogue said. “One tradition that my friends and I started my junior year was hosting murder mystery parties. We had many themes including cowboys, the roaring 20s, and pirates. It was always fun to dress up, make some fun food, and goof off with my friends for a few hours. I fully intend on keeping this as a tradition for years to come.”

Over the course of her time at McDaniel, Pogue gained several mentors in her professors, advisors, and classmates.

One of the biggest challenges Pogue encountered was learning how to ask for help.

“I knew in theory that people wanted to help me, but I still refused to attend office hours, go to tutoring, ask for extensions, or let my friends know that I was struggling,” Pogue said. “I finally accepted that it was not only okay, but encouraged to get help from professors and friends, which made the rest of college more manageable.”

Although Pogue was able to overcome her challenges, she still has some additional advice for the first-year version of herself.

“Join the Jazz Band. Talk to that cute boy in your history class. Study more for your chemistry tests. Start working on your capstone NOW,” she said.

After graduation, Pogue hopes to someday have a job working in a museum, archive, or library. However, she plans on taking it easy for the time being.

“In the short term, I plan to take some time to relax and spend time with family and friends (hopefully not only digitally!),” she said.

“I will leave you with a book and movie recommendation,” she said. “Read the books of Terry Pratchett, and watch the films of Studio Ghibli.”