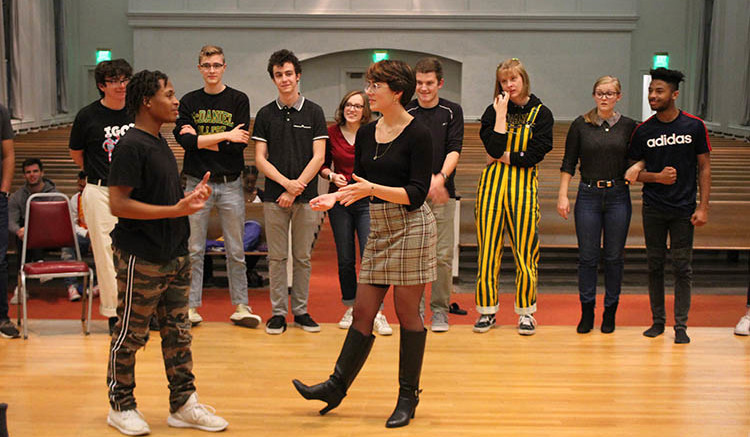 Members played a series of classic Dangersauce games, including “Freeze,” where Sauce members were asked to dance until the caller yelled stop, then proceeded to act out a scene based on how they were posed when they froze. They played “Foursquare,” where members paired up and acted out various scenes based on different relationships and situations. They also played “Director’s Cut,” where the audience created a movie title that does not exist, and players acted it out. This show’s movie was titled “Republican, not Republicant,” which followed a politician and her lover/running mate.

The troupe also took advantage of alumna Mable Buchanan’s rapping skills, where she free-styled a series of songs about living in a mobile home in a game titled “Mixtape.” Buchanan, along with other Sauce members, also participated in a game called “Radio Show,” where players improvised different radio stations, including joke news, polka music, country rap, lizard mating calls, and present-wrapping radio.

The last game of the night, “World’s Worst,” asked the audience to select a few scenarios so members could then act them out in a series of short scenes and quick remarks or one-liners. Themes included World’s Worst bachelor party, parents, and first date.

Dangersauce invites the McDaniel community to attend their Halloween show, which will take place later this month.