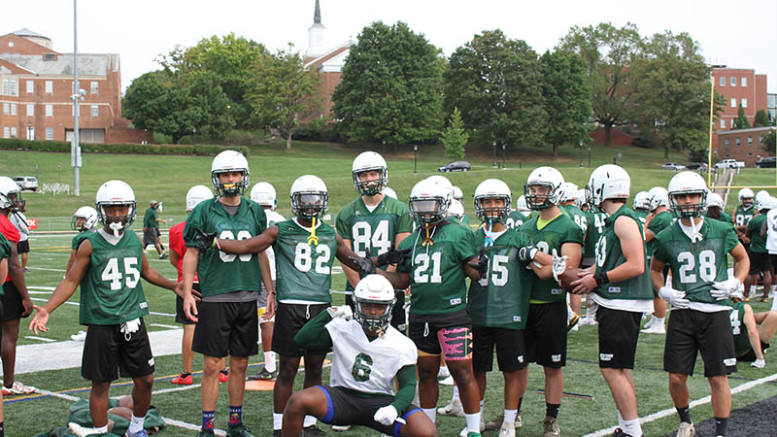 If there’s one word to describe McDaniel College football player Habeeb Baba, it’s “contagious.” Just a sophomore, Baba has already established himself as a leader on and off the field through his tenacious effort and powerful energy.

A ballhawk who never gives up on plays, his work ethic and attention to detail have earned him a starting role as a safety for the Green Terror. Although he is young, Baba is already well-respected by his teammates and coaches, who praise not only his feats of athleticism and pure skill, but also his unmatched humility when he interacts with other people.

“With Habeeb, it all starts with his personality. He is a very humble young man who has a great sense of direction and focus,” Head Coach Demarcus White said. “His teammates love him, his friends love him, his professors love him. He’s a standup guy and is always the life of the party.”

Baba’s outgoing personality makes people relaxed and comfortable talking to him. As a communication major, he plans on using his time and education at McDaniel to work with others.

“I don’t really know what I want to do, but I love to interact with people,” Baba said. “A communications degree is broad enough so that when I go into the workforce, it will help me with whatever I choose to do.”

He has had some experience at McDaniel assisting people, working as a desk attendant at Gill Center, as well as a referee for intramural sports.

Although his character makes him a lovable figure on the Hill, Baba knows that there is a place for fun conversation, but there is also a place for hard work.

“I’m a goofy person,” Baba said. “On the football field I’m always joking around, but when it comes to my work, I’m pretty strict on it.”

White said that there is no substitute for a player like Baba: “he is always getting everyone organized in practice and the film room.”

When approaching either football or school, Baba said confidence is key.

“On the field, you can’t be timid, or you’re likely going to get hurt or embarrassed,” Baba said. “I take this mentality over as a student, too, because I take on hard assignments as a challenge I need to get through.”

Much of the passion in his pursuit for excellence can be attributed to his adopted mother.

“She is my biggest influencer. She always made sure that I had everything that I needed to be successful,” Baba said. “She knew I wanted to be great, and she wanted me to be great, so she was always on top of me.”

Baba’s grit and perseverance started early in life, when he immigrated to the United States at age five. Although from Bristol, Pa, Baba is originally from Lagos, Nigeria. Baba’s move to America was part of the efforts of his father, whose plan was to bring the entire family to the U.S., but was prevented from doing so because of financial restraints.

“I have a lot of respect for my dad for it because it was one of the best opportunities that he gave me,” Baba said. “If I didn’t come here when I was five, I wouldn’t be in the position I’m in today.”

Although physically separated from the other members of his birth family, Baba still maintains regular contact with them.

“I keep in touch with my mom and my sister. I call every Friday. Other than my [adopted] mom, they’re my biggest motivators,” Baba said. “I was given the opportunity to become great and successful. That’s why I’m trying to give them that same opportunity. My end goal is to bring my family over to America and provide for them.”

He feels a sense of responsibility in finishing the mission that his father started; his motivation to work hard at McDaniel is driven by his family.

“I take my education so seriously because I have a lot on my back and have a lot of pressure, but I don’t back down from pressure,” Baba said.

Although he sets big expectations for himself, Baba has the will to step up to the challenge and succeed. When he’s given the spotlight, he doesn’t shy away from it; he embraces it. When Baba was given a chance to start as a freshman, he responded with eight tackles, two pass deflections, and one interception in his debut.

“After my performance, my coach put the utmost trust in me,” he said.

For his personal goals this season, Baba has his sights set on becoming an All-American, and for the team, he said, “we want to prove that McDaniel is not the floor mat anymore. We’re calling this season the ‘Revenge Tour.’ We’re not the old McDaniel. We’ve taken on a new mentality, and we want to send the Centennial Conference a message.”