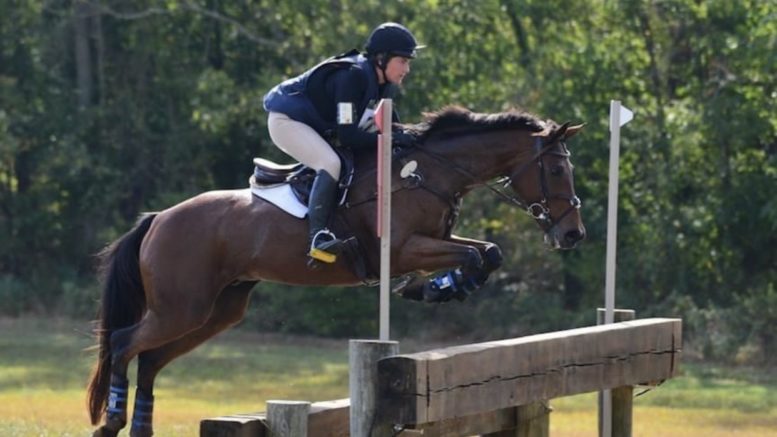 “I’ve taught some very smart students, but Molly is unique in how keen a sense she has for putting learning into action,” said Kate Dobson, PhD, Associate Professor of English at McDaniel College. “I think she’s remarkable.”

Molly Sherman, the journalist, activist, economics and environmental biology double major with a minor in writing, student leader and equestrian athlete for the United States, graduates spring 2022. Her impact was felt in all reaches of McDaniel, and she will depart having affected the lives of so many.

She began on the Free Press staff, during her sophomore year, as the Commentary Editor, and served as the Co-Editor-in-Chief beginning in her junior year to half way through senior year. She stepped back to be an Assistant Editor for the remainder of college after joining the editorial team in December 2021 for HealthLinks Magazine in Charleston, South Carolina.

“My favorite part of editing for the Free Press has been having conversations and making edits that best serve the stories we tell on the Hill,” said Sherman. “Particularly during the pandemic, it has been an honor to be writing pieces that archive such palpable moments in student life.”

When asked about her start in journalism and what is propelling her writing career, she shares her thinking: “hey, someone has to share this perspective, so why not me?” Sharman added, “It has taken a lot of doubting my doubts about who I can be as a journalist.”

In addition to serving McDaniel’s student run newspaper, she was a founding member and co-coordinator of McDaniel’s hub of the national Sunrise Movement, co-president of the Green Life environmental club, co-founder and co-coordinator of McDaniel Yoga, vice president of the Jewish Student Union, and served three years on the Contrast Literary Magazine Editorial Board. In addition, she was a performing member of the Dangersauce improv troupe, member of the Environmental and Climate Justice coalition, historian for tri-beta, the biological honor society, and a member of six other honor societies, including the Trumpeters. During her college career, she was also nominated for a Phenomenal Woman Award and spent time studying abroad in the Peruvian Amazon with Jason Scullion, PhD.

She also worked as a grader for Nick Khan, PhD, one of her other mentors, in the Economics and Business Administration Department and tutored in first only in the courses he taught and then later as a Learning Assistant in McDaniel’s new STEM Center in economics as well as environmental studies and select courses in math and biology. Additionally, she did teaching assistant work in the English Department and took great pride in working in McDaniel’s Writing Center for three years and becoming an Advanced Peer Tutor.

“I’m particularly proud of my work in Learning Centers,” said Sherman. In addition to her work in the center delivering tutoring on writing and research, and overhauling and chairing the Community Outreach Committee, she conducted research and created deliverables on the ethics of care – an extension of her research that began in her Advanced Tutor training. She went on to present this at the National Learning Center Association in 2021, deliver a mindfulness keynote activity at the 2021 Maryland College Learning Center Association – a board on which she would later serve – and present there again the following year.

Sherman cites a community of professors and faculty for her success on the Hill, including, in addition to the aforementioned, Tracy Fleming, Lisa Breslin, Kevin McIntyre, PhD, Jason Scullion PhD, and Elly Engle PhD. Thinking about where she is right now in her personal and professional life she underscores the influence of Kate Dobson, PhD. “She has helped me find the courage to write boldly, believe in my potential and be kind – to myself and others,” said Sherman.

“She is an exceptional learner, something that she carries across all sorts of subjects and activities,” said Dobson of everything Sherman does and seeks to do – from her leadership and policy-making for the Free Press, to her careful textual analysis of activist persuasive tactics, to the “engaging creative nonfiction” she has begun to craft. “None of this is merely a classroom activity for her. She learns something and then — whoosh! — she’s taking it out into the world.”

In the world off-campus, in addition to classroom implementations, Molly competed actively in the equestrian sport of eventing all four years of college with her horse Winsome, fondly called Charlie in the barn. “We’ve been together since high school and I think it’s pretty special he’s been with me through all four years of college and he’s still with me for the next chapter of life.” To make competing to the intermediate level, the second highest level of eventing in the United States, possible, she traveled home several days each week to train. “It made for a pretty unique experience. In all four years, I can count on one hand how many full weeks I have spent on campus,” said Sherman.

Beyond college, Molly seeks to return to the top levels of eventing with Charlie under the guidance of coaches Colleen Rutledge and Michelle Wellman and with the continued help of her mom, Cheryl Sherman.

Sherman walks away with many of McDaniel’s academic accolades and many contributions to the McDaniel communities. One of her most cherished accomplishments is earning second place in the 2022 prose category of McDaniel’s Contrast Literary Magazine for her memoir “Its quiet.” “People have said this piece has been helpful in their healing from losing friends and family to suicide,” said Sherman. “I think that’s the best impact I could hope for.”

After graduation, Sherman will continue as the Assistant Editor of HealthLinks Magazine, published by McDaniel alum Cullen Murray-Kemp; begin apprenticing at a Soleado Lavender Farm working with wood, microgreens and aquaponics; and carry on contributing to the technology community in Carroll County and beyond apart of projects like the Autonomous Corridor.

Sherman seizes these diverse post-grad opportunities hoping to mature her interests for future education, hone her entrepreneurial inclinations and enable her car-camping goals, hoping to gleam directly transferable skills in woodworking and earn the freedom to work independently on the road. “Molly has an eye for seeing opportunities that others might miss, and she combines that with a boldness and energy that can pull others into projects,” said Dobson.

The world is open for such an opportunistic person as Sherman. It’s with full confidence that she will go on to do incredible things, for herself and the communities she finds herself in. Sherman never backed down from fighting for the earth and the people on it, and never saw a reason to quit, even when the days got long and the nights too short.

With so many interests and an expressed desire for greatness, we’re sure to hear about Sherman again.

“Whatever she does, I hope she will write about it!” said Dobson.