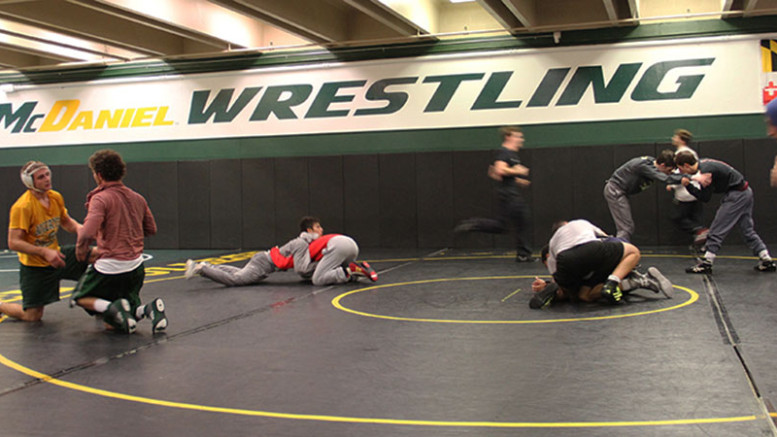 McDaniel's Wrestling team works during one of their practices. Photo by Jullienne Kay.

Everyone in the room was bundled up in sweaters, sweatpants, and even jackets. Getting ready to brave the fall weather? No, it’s just a normal 80 degree practice for the McDaniel Wrestling team.

Their extra layers were drenched in sweat, and practice wasn’t even over yet. One after another got knocked down by their sparring partners.

These wrestlers only took a second to recover mentally and physically before getting right back up again, their faces dripping with sweat and showing their exhaustion.

Almost everyone was cutting weight in preparation for the upcoming tournament.

Cutting weight is what senior Alvontae Dummond explained as “dropping weight to get to a weight class that you feel comfortable at.”

Not everyone on the team cuts weight, but those who choose to do so have their own individual methods. Although some students think it is a ridiculous practice, a few on the wrestling team shed some light on the topic in order to inform their peers on what exactly goes on.

Drummond has been wrestling for 13 years and cutting weight for 11. With his method he loses around nine pounds a week. He goes to practice and then, depending on his weight, he might go to the gym and get on the treadmill or the bike to get down to the weight he needs to be at. He doesn’t have a diet so much as he has a workout routine.

Liam St. John, also a senior, does things a little differently than his teammate. He’s been wrestling since 8th grade and been cutting weight since 9th grade. It is a gradual loss that involves not only a workout routine, but also incorporates a diet to achieve his goal. 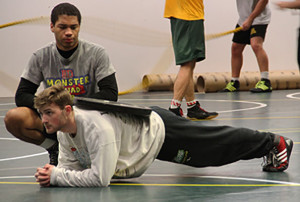 St. John during their “Power Hour” practice, cutting weight with the help of teammate Ronald Mattox. Photo by Jullianne Kay.

St. John said that his diet consists of fruits, lean meats, vegetables, water, and sometimes coffee in the mornings. He emphasized the strictness of his routine, that he “Can’t overindulge in anything.” His workout plan is almost identical to Drummond; practice, layers, and extra workouts, if needed.

Both Drummond and St. John noted that the process of getting to their goals can be physically and mentally draining.

Drummond related the latter to when he’s in a match, “Sometimes it gets to you mentally and it can mess up your wrestling because wrestling is a mental sport and if you don’t feel good you won’t wrestle good.”

St. John had more to say about it affecting his focus in class, but said that he keeps his grades up so it doesn’t bother him too much.

“If I wrestle well and get wins, it’s all worth it,” said the senior, remarking about the bigger picture of cutting weight.

The two wrestlers both noted that the closer they are to their goal weight the more intense the effects were. Drummond said that when he is further from his goal he feels great, but “when you are about three pounds away it really starts to hit you.”

They diverge on their method of gaining the weight back after weigh-ins as well. Drummond describes it as constantly eating fatty and carb-filled foods and then ends up losing what he’s gained throughout the week with his method, and the cycle continues until the season is over.

“It wouldn’t be so bad if I stuck to a diet, but I’m the type of person ‘I’m like okay if I’m gonna lose all this weight I wanna gain it back and I’m gonna do the whole process over again, like I don’t care.’ It’s not smart, but it’s what I do,” said Drummond. 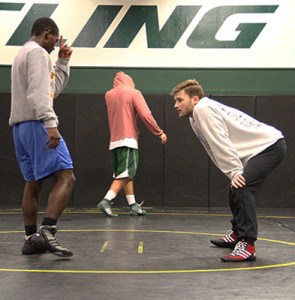 Even when gaining the weight back, St, John sticks to his schedule and keeps it healthy with what he described as “energy foods;” water, carbs, bagels, yogurt, fruit, and foods along those lines.

Even though these teammates differ on their methods, they both agree that their experience with cutting weight allows them to be competitive in a safe and smart way.

Both seniors know the stigma that goes with cutting weight and they said that this really comes from a lack of knowledge on the subject. St. John said that some people will tell him they want to lose weight and ask him how he does it and he attempts to explain the difference.

McDaniel Wrestling started their season on Nov. 5 and compete almost weekly through Feb. 26. They will host a number of meets, including the Green Terror Duals on Nov. 19, Gettysburg on Jan. 13, and lastly Johns Hopkins and Washington and Lee on Jan. 28.