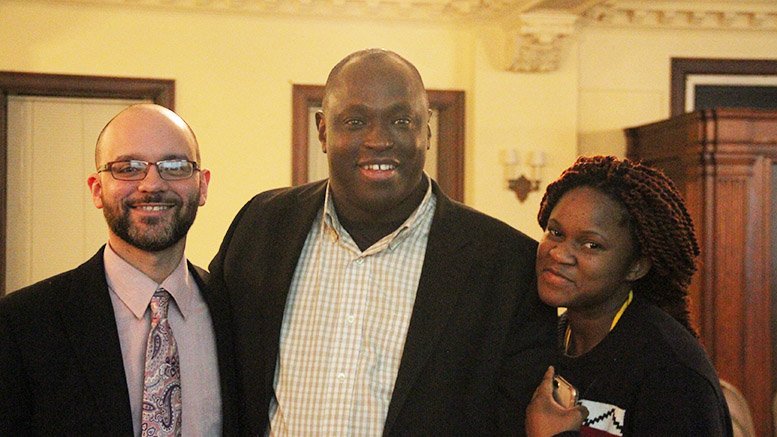 “One spring 2005, I was arrested by three unidentified persons who beat me and left me unconscious. I was saved by an American friend. He said ‘Leave, Siriki, because the next time, it’ll be your dead body,” former refugee Siriki Diabate said.

On Jan. 30, McDaniel College’s Office of Student Diversity and Inclusion (OSDI) hosted a talk in McDaniel Lounge by former refugee Siriki Diabate on the run from his homeland of Ivory Coast to the United States. Diabate highlighted the process behind becoming a U.S. citizen, and his struggles with the Ivorian government system that inspired his escape.

Diabate worked in fall 2002 as a freelancer for a bi-weekly newspaper in Abidjan, Ivory Coast in West Africa. He wrote an article about the plight of Ivorian cocoa farmers and the confiscation of the National ID of government opposition members. “Those cocoa farmers had one big union where, as the premier world-wide producer of cocoa, they’d bargain prices and sell exports to Europe. Unfortunately, the government dismantled that big union. So, the cocoa farmers were no longer benefiting from their price,” Diabate said.

Additionally, a prominent candidate of the opposition party was from the northern region of the country. Due to this, the government issued a confiscation of National IDs in the north to prevent northerners from voting. “The government would do whatever it wanted – that was frustrating. Unable to make ends meet, most of those cocoa farmers were unable to pay for their kids to go to school, and that was alarming,” he said.

Diabate brought these issues to light through the local newspaper. However, he soon became a government target and was forced to run away to Ghana after being arrested and nearly killed. “Everything was scattered in my apartment. I couldn’t get access to my bank account or to my brother and sister’s family,” he said. For five days, the former refugee was sheltered by American Robert Walbridge and ran through the bushes to cross the border. One night in Accra, Ghana, he was found and attacked again by Ivorian government authorities. He finally decided to move to the United States, with the help of runaway-journalist support organizations like the Media Foundation for West Africa and the Canadian Journalists for Free Expression.

Junior Fifi Moussa, Vice President of the Africa’s Legacy club said, “His story is a sad one. I can’t even imagine having to hide from a government that’s trying to kill you.”

According to Diabate, the refugee process took nearly a year. He finally immigrated to the United States in 2006 and became a citizen four years later, taking English language exams and undergoing various investigations. He is now in the second year of his doctorate and recently brought his daughter to the U.S. after losing contact with her for over ten years. Oftentimes, he said, other runaways are not as lucky. Many refugees he knew were denied entrance to the U.S. and are still battling their way to freedom.

Junior Larissa Fon Tendo, Public Relations Assistant of Africa’s Legacy, said “I didn’t know refugees had to go through so much. I personally immigrated to the U.S. through the legal process. So, I too understand the difficulties of immigration. However, after visualizing his story, that’s something that I don’t think any human being should have to go through. These refugees – these are human lives we’re dealing with.”

“Hearing a firsthand account opens students’ eyes to the refugee experience. You read stories about refugees, but to hear someone actually come and talk to you about it gives me a better understanding,” Fon Tendo said.

Siriki Diabate agrees that students need to learn more about what is going in their world. “Young folks, please don’t take for granted the freedom you have here,” he said, “Get to know the world. Understand that there is more to know out there. Because there are some places today, you wake up and don’t know if you’ll see tomorrow.”