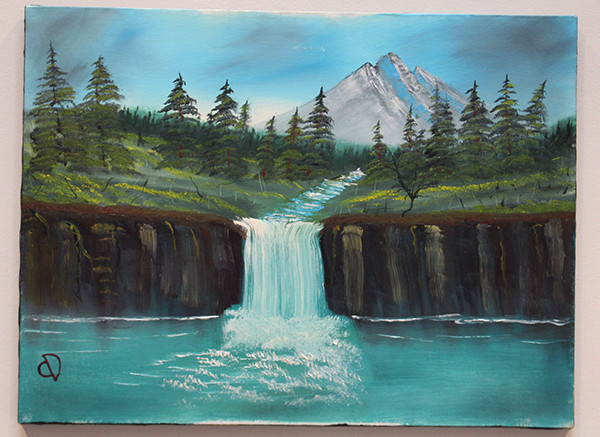 Consisting of four exhibits, artists Chanan Delivuk, Sara Caporaletti, Cheeny Celebrado-Royer, and Caitlin Bennett display works they have put together since graduating from McDaniel College. In keeping with the title, each exhibit revolved around a place and its effects on the artists and the world in which we live.

Perhaps the most noticeable exhibit in the gallery is a piece entitled “navigating family in an unfamiliar place” by Chanan Delivuk. It consists of multiple media ranging from paintings and photographs to silverware and even food.

The subject of her exhibit was a return home as she traveled through Croatia in search of her family heritage. In a last minute stroke of luck, she met an old man who lived in the village named for her family, Delivuki. The man invited Delivuk to the village and served her homemade crepes.

To re-create this experience during opening night, she cooked crepes and served Turkish coffee while playing a video in the background of her conversation with the man. While the viewers munched on crepes and sipped their coffee, they were able to view photographs of Delivuk’s trip.  Next to these photos are paintings done by her father, which look strikingly similar to the area around Delivuki.

For Delivuk, exploring the unknown is a way to better herself. Interestingly, she prefers to plan things out and stick to an agenda, but this trip was completely unplanned and off the cuff, giving her a chance to try things differently.

This exhibit is well put together and visually stimulating. Comprised of many different elements, it keeps the viewer involved and interested. The subject of the exhibit is thought-provoking and inspiring, causing viewers to want to get out and explore for themselves.

While Delivuk’s exhibit focuses on a physical place, alumna Sara Caporaletti’s pieces are focused on a spiritual place. As a practicing Catholic, Caporaletti’s main piece is a hand-sewn, self-portrait on a transparent white curtain. She also has a piece including pictures of churches where the physical buildings has been cut out and placed above the rest of the image.

Focusing on the idea of repetition, common in the Catholic faith, Caporaletti painstakingly hand-sewed her portrait onto the curtain. Interestingly, the transparency of the curtain also plays into the meaning of the piece. As she stated during the opening, the viewers can see both the neat front of the portrait and the knotty back at the same time.

This plays into the idea that people often put on an outside façade, while really being twisted and broken inside. The pictures of the churches are representative of how the body of Christ is spiritually outside of the world.

Caporaletti’s exhibit is intricate, meaningful, and well done It is clear that Caporaletti put a lot of time and thought into her pieces; it fits well with the theme of place in a unique but definite way.

Another alumna, Caitlin Bennet, displays her work in an exhibit entitled “Greetings from America.” Deceptively simple, her piece is nothing more than a rack with postcards in it. It is only when the viewer closely examines the cards that he or she finds the meaning of the exhibit. Essentially a creative way of looking at history, Bennet explores the racial discord in the United States. Each postcard shows a place and its corresponding racial conflict.

In response to modern news anchors commenting on the novelty of race riots in the United States, Bennet seeks to find and proclaim the truth that race riots have been occurring for over a century. Essentially a proclamation of truth through the eyes of history, Bennet’s piece is thought-provoking and heart-wrenching at the same time.

It gives the viewers a new perspective on the United States, and it even has the draw to motivate people to action. From an artistic perspective however, the simplicity of the display plays to its disadvantage. While its message is exceptional, it is easy to bypass it due to its unobtrusive nature.

Finally, alumna Cheeny Celebrado-Royer shows her work in a particularly eye-catching exhibit. A combined image of natural disasters and recycling, she puts together a painstaking miniature of a Filipino town that had been ravaged by a typhoon. Constructed of cardboard, concrete, and wood pieces, this expansive exhibit catches the eye of the viewer and immediately draws them in.

Inspired by memories of typhoons growing up in the Philippines, Celebrado-Royer puts together these sculptures while reflecting on the nature of memory itself. As she says in her artist’s statement, memories are just brief snapshots and their details often become unintentionally changed or misconstrued in hindsight.

In keeping with this idea, Celebrado-Royer changes the exhibit at each place it is displayed. Using recyclable materials, she shifts and alters her exhibit like people often do with their memories. A fantastic exhibit, Celebrado-Royer’s piece deals with a thought-provoking topic in an effective manner, and it is visually capturing. Additionally, the medium and physical set up of the exhibit both reflects and even enhances its meaning.

Overall, “Notions of Place: Four Alumnae, Four Interpretations” is well put together, thought-provoking, and eye-catching. Additionally, it is an encouraging event for McDaniel College art students. Seeing fellow students who had graduated and then continue in the field of art offers current pupils hope and assurance that they could indeed make a living in a profession that is often written off as a waste of time and money.