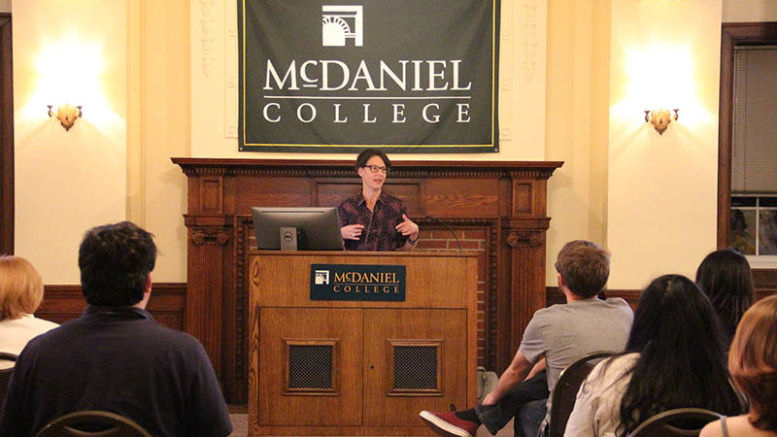 When Amanda Bailey, Ph.D., told her daughter she would be presenting on Shakespeare to an audience of McDaniel students, faculty, and staff, the 10-year-old asked, “Shakespeare, seriously?” with obvious confusion. This reaction became the inspiration for Bailey’s presentation.

Bailey, professor and chair of the English department at the University of Maryland, visited McDaniel Lounge on Tuesday, Sept. 10, to present the 34th annual Holloway Lecture. Her talk addressed the value of the humanities in today’s career landscape.

President Casey began the evening with a few words of praise regarding McDaniel’s recent achievements in the news. Then, Professor of English Rebecca Carpenter, Ph.D., briefly introduced Bailey.

“Bailey’s work reminds us of the continuing resonance and relevance of Shakespeare’s work some four centuries after his death,” Carpenter said.

And yet much like Bailey’s daughter’s dubious reaction, more and more people today are questioning the value of Shakespeare and the humanities as a whole. Students are encouraged to pursue careers in science, technology, engineering, and mathematics to ensure financial stability and success.

However, Bailey argued Tuesday night that no other discipline is as resourceful and portable as the humanities, which emphasize the benefits of risk-taking, flexibility, and adaptability.

According to Bailey, a liberal arts education teaches this ability to adapt, yet a STEM education or training for a specific piece of machinery can be rendered obsolete, thanks to new technological advances.

Bailey further emphasized the significance of teaching Shakespeare, both in the classroom and in programs like Shakespeare Behind Bars. She stressed the importance of simulating life-altering choices—such as those present in many of Shakespeare’s plays—without experiencing any consequences.

With the boundary between work and play more permeable than ever, playing and being open to games simulating difficult situations is crucial, she said.

“21st century workers need to be innovative, nimble, and inventive,” Bailey said. “It is the lack of seriousness undergirding humanistic inquiry that has produced audacious coders, disruptive start-up leaders, and groundbreaking risk-takers.”

Bailey’s lecture was followed by a brief Q&A. The Holloway Lecture, created in recognition of former College President Fred Garrigus Holloway, aims to pay tribute to literature, one of Fred Holloway’s passions.