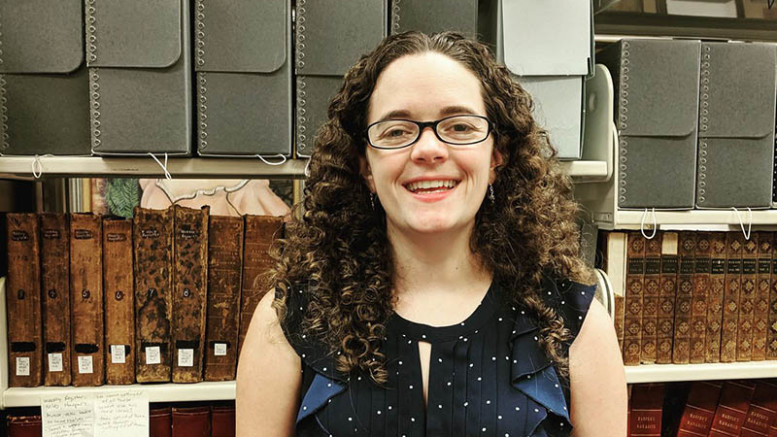 If you stop by the library this semester, you may see a new face in the archives – Gwen Coddington, the new archivist and special collections librarian.

Coddington began working at McDaniel in mid-August, prior to which she was working on her Master of Science and Master of Library and Information Science at the University of Maryland. How did she end up on the Hill?

“I’m a Carroll County resident,” she said, “And I wanted to be at an institution that actively contributes to my community.”

She was also attracted to McDaniel’s academic orientation as a liberal arts school and its similar size to the College of Wooster, where she received her Bachelor of Arts in history.

“I like the idea of participating in a campus-wide community that values a well-rounded education,” Coddington said.

But why archival work? Coddington cites a passage in a Chekov short story, “The Student,” where he writes, “The past…is joined to the present by an unbroken chain of events, proceeding one out of the other. It seemed to him that he had just seen both ends of that chain. As he shook one end of the chain he was able to touch the other.”

“Reading histories and other interpretive works is crucial to the intellectual process, but I think working with primary documents gives an emotional intelligence that’s hard to reproduce,” Coddington said. “It shortcuts time and space and helps you connect with the dozens of other people who might have handled that record, whether they be creators or caretakers or researchers. Well, it’s a bit like pulling the chain of history and watching the other end move.”

In terms of her goals moving forward in this position, Coddington hopes to build on the work of the previous archivist, Andrea Briggs, to further the organization and intellectual control of the collections. She also plans to expand the library’s outreach on campus and in the community.

In just her short time here already, she has already started to discover interesting things.

“Exploring the collections has been fascinating,” she shared. “For example, I’ve been helping a researcher find information about a former WMC grad, Sadie Kneller-Miller, who was a photojournalist at the turn of the 20th century. Come to find out, she was the first woman baseball reporter and a stunning world traveler. She covered events like George V’s coronation, a National Convention (as the only woman photographer) and photographed military bases at Indian Head and Newport where no other photographer had been admitted before.”

As a final thing to share, she would like to remind students to explore the Archives web page on the Hoover Library website. They have digitized back issues of student newspapers, yearbooks, catalogs, and more.

“And if you can’t find what you’re looking for, please ask!”

Want to Get Involved? Give Back to Your Community!

New Director, Same Campo, and the Return of Frosted Tips