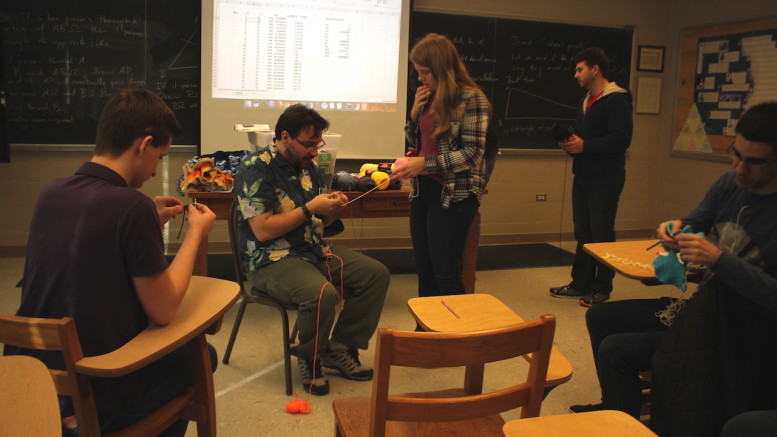 “How tall are your stitches?” and “are there any colors people would like me to get more of?” are not questions you typically hear a professor ask in a college mathematics course.

In his Crocheted Hyperbolic Geometry Jan term course, Benjamin Steinhurst, Ph.D., challenges his students to understand hyperbolic geometry through the art of crocheting.

Most people are at least somewhat familiar with Euclidean geometry, which is commonly taught in high school; this type of geometry is easily written on paper – think of drawing and labeling the angles on a parallelogram.

But hyperbolic geometry is more complex, one of its most remarkable differences being that within this methodology, the sum of a triangle’s angles is always equal to less than 180 degrees, which contradicts Euclidean geometry’s commonly-known teaching that the sum does add to 180 degrees, or a straight line.

“Hyperbolic geometry is much harder to figure out because for a long, long time, there weren’t good ways of drawing what hyperbolic geometry looked like,” said Steinhurst, assistant professor of mathematics. “It was all completely abstract reasoning in this very dry way that turned students off completely.”

This is where crocheting mingles with geometry. Daina Taimina, a mathematician at Cornell University, where Steinhurst has also previously taught, introduced crocheting as a means to understand this kind of math.

“Taimina realized that with relatively simple crocheting, you can make an object that had all the right characteristics [of hyperbolic geometry],” Steinhurst said.

Certain crocheted objects can be folded in a way that demonstrates how a hyperbolic triangle’s angles do not add up to 180 degrees: the crocheted hyperbolic plane that each class member makes and works with, a small woven piece of fabric whose edges resemble wavy coral, is folded various ways and marked on the folds with pieces of thread. Students can take these fold lines and make them into a triangle, then find that its angles add to less than 180 degrees.

This January marks the third time Steinhurst has been teaching these methods in his hyperbolic crocheting course.

While he has been crocheting since middle school – mostly blankets, he said – many of Steinhurst’s students this semester had never crocheted before the beginning of the 2019 Jan term.

Sophomore Mackenzie Meyer didn’t initially expect to be on campus for this short semester, but when the study abroad Jan term she had planned on taking was canceled, she considered crocheting. Meyer said her mother knows how to knit, and so she decided to learn to crochet.

“[My mom] will teach me to knit; I’ll teach her to crochet,” the biology major said, speaking of plans for when she returns home.

“[The students] have already all shown me that they can sew 40 grams in two days,” he said. Grams refer to the amount of yarn by weight; 40 grams of the yarn Steinhurst’s students use is equivalent to about 40 yards.

Jonathan Lingg, a junior psychology major, said he might even try crocheting on his own after Jan term.

“I’ll probably try it out in the future, see if I can make something for myself,” he said.

The course tackles more than just crocheting and geometric equations, however.

For centuries, hyperbolic geometry was regarded as an abstract concept that may not even exist. Steinhurst teaches how this branch of geometry transitioned into a legitimate topic among mathematicians beginning in the nineteenth century: his course sheds light on hyperbolic geometry in a broader context than just in a niche corner of mathematics.

For Steinhurst, this is what the class is about.

“That’s actually really the point of the class. It ends up being a sort of, ‘what is mathematics?’ rather than ‘you need to know these five things really well,'” he said.

He said the course’s mathematical and philosophical components complement each other.

“I think the math aspect [of the course] is really helping them understand how the history and the philosophy came to be.”

And it seems to stick with the students – most notably during their crocheting hour in the second half of class, where Steinhurst hears and takes part in informal conversation.

“Largely, it ends up being about math,” Steinhurst said.

Free Press Arts & Culture Editor Laurel Pogue and Co-Features Editor Erin Pogue are enrolled in Steinhurst’s course. They were not involved in the editorial process of this article.