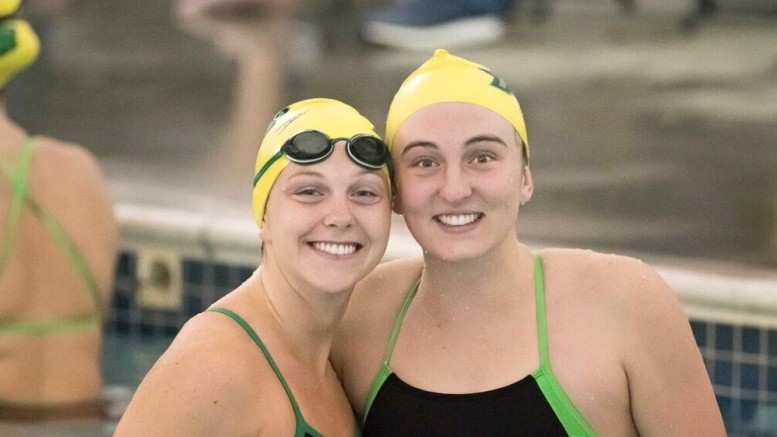 With winter sports on the Hill well underway, swimmers Blair Boyle and Sara Hegna have risen as prominent figures within the McDaniel athletics community.

Both Hegna and Boyle have already cemented themselves into McDaniel College history, holding several records, with the drive to break even more.

“Once you break a record once you are like, ‘Oh yeah, I want to do that again and again,’” Boyle said.

Boyle, a sophomore from Springfield, N.J., currently holds the school record in the women’s 100-meter freestyle race with a time of 52.64 seconds.

Hegna, a junior from Brielle, N.J., holds the pool record for both the 100-meter and 200-meter backstroke races. In addition, Hegna was a part of the school record-setting 200-meter and 400-meter medley relay races in 2017.

“I look at the record board all the time during practice,” Hegna said. “I think to myself, ‘I can get that record, I can beat my record from last year,’ or, ‘I can beat other people’s records.’”

Despite already having several name places on the board, both Boyle and Hegna want to hold as many records as possible.

“My biggest goal at the end of college is to have my name up on that board and leave my mark,” Hegna said.

Both swimmers started participating in the sport at a young age.

Hegna comes from a swimming family and, along with the sport, had a pre-developed connection to McDaniel, as her father swam competitively at Western Maryland College.

“That was a huge inspiration for me to come here and swim,” Hegna said.

Similar to Hegna, Boyle’s interest in swimming emerged from family members who swam. Growing up, both Boyle and her brothers swam competitively year-round.

Establishing an early foundation into swim and emerging as two of women’s swim top competitors has paved the way for relationships with teammates growing into friendships that support one another, both on the pool deck and off.

“When I came to college, everything was changing and my teammates and I all had one thing in common and that was swimming,” Boyle said. “We quickly became friends and now it’s so much more than a team.”

Having established that connection with teammates, both Boyle and Hegna have emerged as leaders on the team and look to become official captains in the coming seasons.

The rise to leadership and success in competition is rooted in mentality.

“I hate losing,” Hegna said. “I really try and work to be the best that I can to be able to win against anyone.”

With a champion’s mindset, the focus that Hegna and Boyle bring spreads among their teammates.

“They bring great energy to both practices and meets,” Head Swim Coach Jeff Hiestand said. “They are both competitors and both hate to lose.”

Ultimately, Jan term creates one of the final opportunities for training before the final leg of the winter sports season, and both Boyle and Hegna recognize that.

“Jan term is the part where it is make or break for champs,” Hegna said. “[We] have to work hard even though it hurts.”