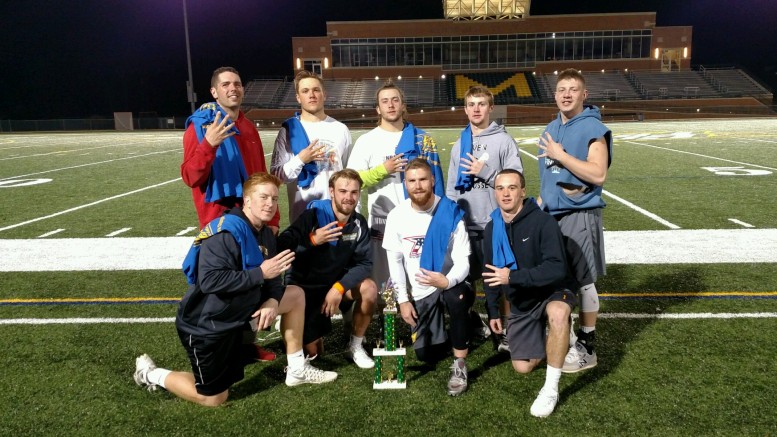 McDaniel’s Intramural Flag Football season came to a close on Sunday night with the championship game between Phi Delta Theta and Lacrosse. Playing under the lights at Gill Stadium, Lacrosse took home the trophy with their fourth championship win in the last four years.

Lacrosse broke open the scoring on the first drive, but failed to convert on the two-point attempt and took a 6-0 lead with not even two minutes off the clock.

Five minutes later into the 22 minute half, Phi Delta Theta found the end zone to tie the game at 6-6. A completed two-point conversion gave the fraternity their only lead of the night at 8-6.

Halfway through the period, Lacrosse scored another touchdown and, once again, failed to convert for the two points, giving the team a 12-8 advantage.

With three minutes to go, Phi Delta Theta gave up the first ball of the night on downs, turning it over for Lacrosse to score with just 30 seconds left.

Once again, Lacrosse came through with another six points to set the score at 20-8 at the half.

Lacrosse would go onto dominate with a 24-0 second half, taking the game by the 44-8 margin. The victory was the team’s fourth in a row.

Despite sharing a field, Intramural Flag Football and McDaniel’s NCAA Football teams are quite different. Besides the obvious facts that one falls within national jurisdiction and the other is governed locally on campus and one uses tackling while the other uses flags, there are a number of other oddities between the two.

The seven-team intramural league kicked off their weekly Sunday schedule on Sept. 11. For seven Sundays in a row, six of the seven teams played against one another, rotating who got the bye.

By the time Oct. 30 came around and the final games were settled, Lacrosse found themselves in second place at 3-1 and Phi Delta Theta in fourth place at 3-3. Rounding out the top of the standings was Larry League at 4-1 and Baseball Team at 2-1-1. Bachelors, SAE, and Alpha Sig filled out the bottom three spots at 2-3, 1-3, and 0-3-1, respectively.

Unlike NCAA football, each game lasts a little under an hour, with two 22 minute halves and a short halftime break. The clock winds down constantly with no stoppage of time, no matter the play.

It also takes 20 yards to get a first down instead of the usual 10, making things a little more challenging.

To kick off, teams designate one player to throw the ball, taking the place of the kicker. The modification accounts for the fact that kicking is an extremely lacking skill among football amateurs and throwing allows for much more accurate and placed kickoffs.

Like in the championship game, most teams try for a two-point conversion after each touchdown instead of an extra point field goal. Field goals are nearly unheard of, with teams going for it on fourth down, rather than punting and trying for the three points.

Even with the modifications, the sport remains incredibly active and lively. Scoring is plentiful and defense is as agile as ever.

Phi Delta Theta came out on top this season with 222 points scored, allowing just 131. Lacrosse played a slightly more defensive game, allowing just 60 points while scoring 114 of their own.

The two championship teams met once before in the regular season on Oct. 2. The final score came out in favor of Lacrosse, but the fraternity put up a fight, losing by only three points, 35-32.

Though the season for flag football is over, intramural sports are still thriving on the Hill.

The second half of the fall semester is currently hosting indoor basketball and floor hockey. Spring will see volleyball, indoor soccer, and more basketball. The fall also played host to outdoor soccer.

Registration and information for intramural sports can be found on McDaniel’s IMLeagues website, open to all current students. Those interested may also contact Steve Corrieri at scorrieri@mcdaniel.edu.