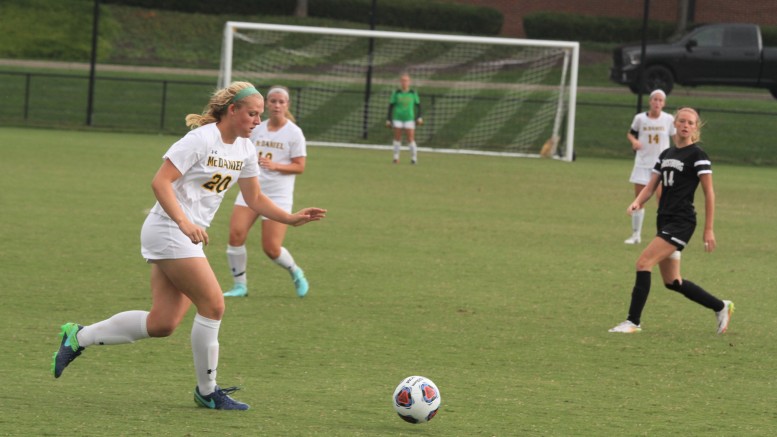 Katie Kirschenmann led McDaniel (4-1) with her second goal of the season at the 6:43 mark. The senior found the back of the net off her own rebounding shot, originally from a ball centered Paola Rosa.

“I basically just tried to find a different angle for [Rosa’s] pass,” said Kirschenmann, “and I was going for it and she placed me and I hit it on time. I’m bouncing back awkwardly and I hit it with my left foot and it went into the corner.”

The Bobcats (1-4) had their best chance to score on a Gwen Schwemm free kick from the top of the box, awarded after a second half McDaniel foul.

Freshman Annalise bell scored her first career goal on a Kaylee Holliger assist minutes before the halftime mark, giving McDaniel a 2-0 edge that they would sustain for the remainder of the game.

“We kept the ball really well and communicated really well,” said Kirschenmann. “We had good chances on goal and I thought we played really great.”

“I thought they made it look easy,” said head coach Sandy Lagana.

The Green Terror are now 4-1 on the season having shut out their last four opponents after their season-opening loss to No. 4 William Smith.

“It’s a great momentum,” said Kirschnemann. “We’re definitely really excited to have this momentum going in [to conference play]. Definitely having four shutouts is great and we can’t wait to continue on Saturday against our conference.”

Backing the defense yet again was goalie Sarah McDonald who made three saves on the day. The senior hasn’t let a ball cross the goal line in over a week.

On the opposite end of the field, McDaniel outshot Frostburg 15-9 including a 12-3 split in crucial the first half. Play in the second half calmed down once they gained their comfortable lead.

“They looked really composed,” said Lagana, “and we haven’t played soccer like that so I was proud that they were comfortable and I was excited to see that and excited to score early because then that changes the game. It gives us more confidence to play.”

McDaniel travels to Ursinus (0-4-1) on Saturday to play their first Centennial Conference match of the season. Game time is at 4 p.m. out of Collegeville, Pa.

“We’re where we want to be heading into the conference,” said Lagana. “We have a lot of things we want to continue working on but we’re in a good place to settle in and start the Centennial play on Saturday.”

Gunnar Ward contributed to this story.