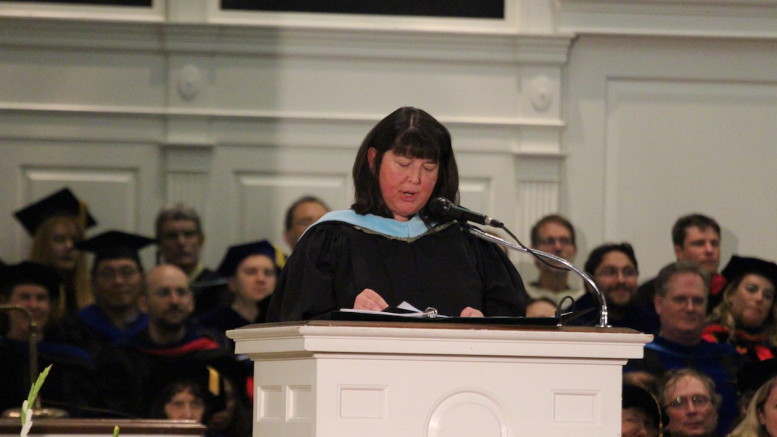 Over the summer, the College made a number of administrative and staff changes. They affect mostly structural and organizational operations rather than students’ daily lives.

Gone are the Academic Affairs and Student Affairs divisions, replaced by Academic and Campus Life, which reports directly to Provost Julia Jasken.

“The goal is for those two areas to work more collaboratively,” said Acting Dean of Students Liz Towle, “because there’s no separation in [the student’s] life between in classroom and out of classroom student involvement. I think our current structure reflects the reality of the student experience more. That’s the goal; to better meet the needs of students.”

It’s easier to help the students when everyone doing so is part of the same area said Towle, formerly the associate dean of student affairs before the summer changes.

In addition to the merger of the student and academic bodies, the position of vice president for student affairs has been eliminated. Beth Gerl, as a result, is no longer with the College. She had been a member of the campus community since 2006.

The senior leadership and the Board of Trustees worked together to make these “difficult” decisions, President Roger Casey said in an Aug. 30 email to the student body.

“I haven’t been involved in SGA for a couple of years so it’s nice to get back into that,” she said.

With the changes, Executive Director of the Center for Experience and Opportunity Josh Ambrose also takes on the role of associate dean of campus and community engagement. The new position puts both the CEO and Office of Student Engagement under his jurisdiction.

“It’s all a lot of leadership and experiential learning,” said Towle. “It made sense that there would be a closer connection between those two.”

Greek life, however, will remain under Michael Robbins, associate dean of students and director of residence life and student engagement. He had been overseeing both the student organization and Greek life sides of student engagement since last fall when he assumed the dean role.

Robbins will also take on the student conduct process to relieve Towle in favor of new responsibilities. This includes training and instruction of the Honor and Conduct Board, a body made up of both students and faculty to hear violations of the code of student conduct.

Though Towle will still work with the College’s sexual misconduct and violence process, she has also been relieved of overseeing the Wellness Center. Former Director of Counseling Services Heidi Huber has transitioned to the director of the entire wellness operation.

“That allows me to take on the role of dean of students which involves spending as much time as I can with students,” said Towle. “I really appreciate that because that’s why people like me get into these jobs, but very often the longer you’re in the field, the less time you spend with students.”

Towle has been with McDaniel for 18 years.

On the academic side, Associate Professor of Psychology Wendy Morris has been named the acting dean of the faculty for the fall semester.

Chair and Professor of English Pamela Regis has been named acting dean of the faculty for the spring when Morris takes a scheduled sabbatical.

For the last three years, Morris has split her time between teaching and acting as the associate dean for faculty development. The new role takes her away from teaching and into what was once part of Jasken’s dual provost-dean position.

“I see her as a superhero,” said Morris of Jasken,”because there doesn’t seem like enough time in the day [to do both positions].”

In her position, Morris will continue to support faculty development in their teaching and research.

“All of that work has come into this position,” Morris said of her associate dean work. “In addition, I’m doing things that are more about curricular initiatives.”

Echoing Towle’s statement of unit, Morris is excited about the merging of Academic and Student Affairs.

“I was very much focused on Academic Affairs,” she said. “Now that we’re Academic and Student Life, all under the provost’s leadership, there have been some really cool productive opportunities for collaboration.”

One example she pointed to was the McDaniel Local pre-orientation program that was rolled out this past summer. The College offered it to about 120 students and plans to scale up to 400 next year.

She also noted that it has been much easier to put committees together now that the two divisions have merged.

“I’ve really enjoyed getting to know people on that side,” she said.

Take Back the Night walk a moving success