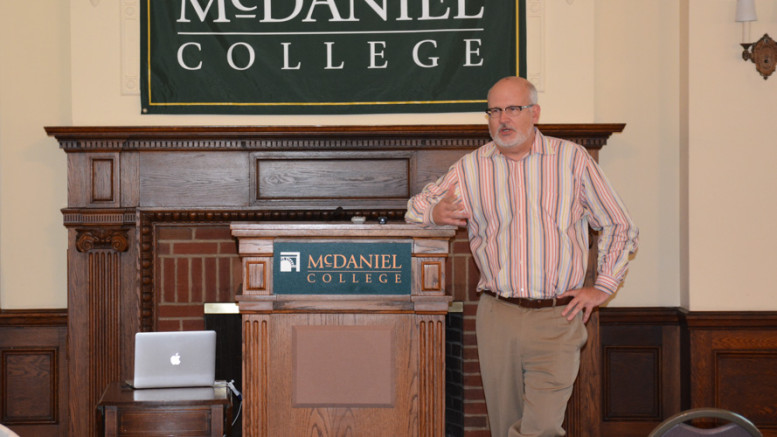 On April 19, as part of an ongoing effort to satisfy student calls for more transparency, President Roger Casey held a presentation in McDaniel Lounge going over the specifics of McDaniel’s budget, both this and next year.

The presentation started out with the two main factors behind McDaniel’s budget: revenue and expenses. The process of how student prices are determined was highlighted. This can be a complicated process since administration and the board of trustees must go off of trends since it is impossible to know exact numbers. In mid-February the projected expenses are assessed and in April a meeting of the board is called to present projected expenses.

Believe it or not, next year’s budget is still in the works, with a final meeting to occur in the next few days. The board of trustees, composed of 40 people (mostly alumni),  has the power to approve the budget, not President Casey, which merely seeks to implement the decisions of the board.

With a $61 million budget for this school year, there are certainly some immense expenses. Here’s the percentage breakdown of them all:

The college took on $4 million in debt in order to pursue an energy conservancy project, which was also fed by other financial sources, but this will pay for itself over time. This year, the college spent $35 million on financial aid out of the total $61 million budget. The healthcare costs of the college vary, since the institution self-insures its employees to a point. Casey asserts that the fastest growing expense involves legal fees due to increasing federal provisions, citing a year when 252 new federal compliance requirements were enacted.

The college’s methods for securing finances is piloted by student TRB (tuition, room, and board) payments. However, the institution has other sources of revenue:

It is clear that the majority of the college’s income comes directly from undergrads’ pockets, however President Casey had some important comparative points to make. Other schools will tag on “comprehensive fees,” which are fees just for attending an institution. While McDaniel has course fees for certain classes, there are none that stretch across the board, which, claims Casey, is the case at schools like Towson and the University of Maryland. At McDaniel, this is only done for graduate students, and remains at around $100.

McDaniel received over $2 million in state funds, and is projected to receive $500,000 more next year. Casey claimed that this is the effort of many small private colleges. Additionally, McDaniel’s endowment, now sitting at around $110 million, is used annually, with 5 percent of the funds being used; however, the endowment is still growing. President Casey claimed the endowment was just over $60 million when he was inaugurated.

President Casey asserted that he and other college presidents spend a great deal lobbying to prevent debt from crippling their graduates. He cites a 2007-2008 change shift of student loans to the federal government for an impact on Pell Grants and rising loan interest rates. He has advocated for increased scholarship spending and loan forgiveness. Also, due to a new Prior-Prior Year income requirements for FAFSA, students will be able to apply much earlier.

A last major topic was wages. President Casey brought up the topic of his own salary, saying that his total compensation is $460,000, with his actual salary sitting at $391,000, and paying $135,000 in income tax last year. He states that there has been no across-the-board raise for staff and faculty in two years; most increases have been to address income inequality.