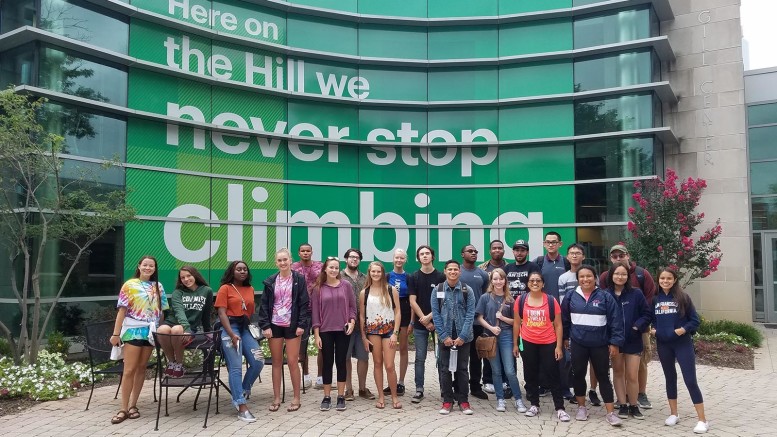 Students who found themselves on campus over the summer may have noticed a group of early newcomers to the Hill this year. Their welcome intrusion comes to us courtesy of the McDaniel Local program and the Center for Experience and Opportunity.

Erin Giles, an omnipresent force for good on McDaniel’s campus, has risen to Associate Director of Community Engagement, a position which makes her the point person for the McDaniel Local program.

“We created McDaniel Local as a new pre-orientation experience to give students the opportunity to get connected on campus and with Westminster sooner and more thoroughly,” Giles explained.

During the three days and two nights students spent on McDaniel’s campus, they participated in a schedule geared towards a blend of fun and educational activities. These included a stop at the Singleton-Matthews Farm, a meeting with the producer of children’s show “Zoboomafoo,” and many opportunities for forming new ties both on Main Street and on campus.

While the name itself, McDaniel Local, implies a meshing of the campus and the surrounding community, participants and organizers seem to agree that the true charm in the program lies in giving students more of a chance to make friends and soak in the Hill – and Westminster – before the everyday grind of college life takes over. Giles evidenced this by pointing to a first-year student that had attended the program, Harrison Greer.

Greer attended the fourth and final summer session of McDaniel Local. He described the program with a collection of memories that make it clear that this was a positive experience for him.

“I was really nervous, of course, coming, but that three-day local thing completely cooled my nerves,” Greer said. “So coming to Orientation I knew people and I was more open to meeting new people, so it helped a lot for me, at least.”

The program was piloted in the fall of 2017 and was followed by a larger rollout this summer. The last session, specifically for those whose homes are at least 300 miles away, fell right before Orientation and allowed those who attended to avoid making the trip to McDaniel more than once. The other sessions occurred earlier in the summer.

Due to the success of both the pilot program and the summer sessions, McDaniel Local will continue next year with an expected attendance of at least 400 students.