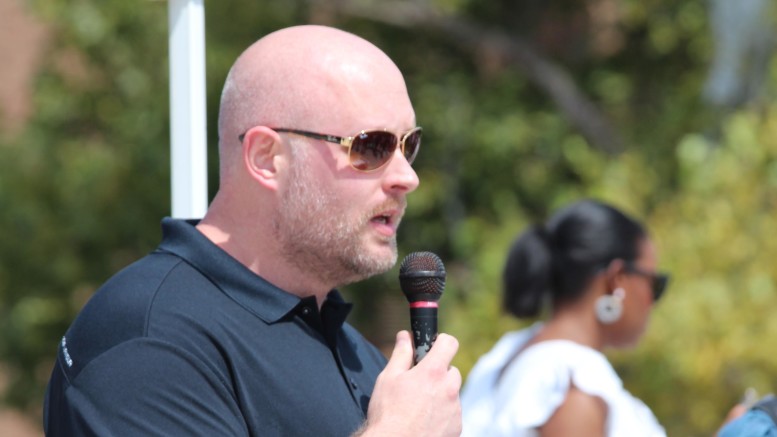 As first-year students continued along their busy Orientation schedule this Saturday, they unknowingly followed President Casey and his wife Robyn Allers down Main Street and into town. Many thought they were simply strolling through town, but the surprise that awaited them at the end of the walk was a meeting with Joe Dominick, the mayor of Westminster and McDaniel College alumnus.

The surprise event was a chance for students to hear from Dominick about his experiences at McDaniel, connect with the community by visiting the Boys & Girls Club of Westminster, and learn about other opportunities to give back.

“I’m trying to strengthen the relationship between the city and the College,” said Dominick ahead of the event.

Addressing the first-year students, Dominick explained that he grew up in Baltimore County and was initially “coaxed out to Westminster to attend McDaniel,” then Western Maryland College. It was the only school he applied to.

“I have McDaniel to thank for helping me forge many lifelong relationships,” said Dominick.

Dominick went on to say that without McDaniel, he would not have lived in Westminster or even become mayor.

“McDaniel is the greatest asset to this city and has enhanced the quality of life for all those living here,” he said.

McDaniel students have partnered with the Boys & Girls Club of Westminster since Nov. 2010 and “have been a tremendous source of support for the Club, serving as mentors, academic tutors, and program facilitators,” according to the organization’s website.

The work completed by McDaniel students and other partners at the Club has been recognized by the White House and the national chapter of the organization, said Bishop.

After the speeches, students were invited to visit inside the Boys & Girls Club before heading back to campus. They toured the dance studio, radio station, and recording studio located within the former bank building.

Event organizers hope that Saturday’s activities, coupled with the new McDaniel Local program from this summer, will encourage students to explore the surrounding community and find ways to get involved through internships, volunteer work, and part-time jobs.

The case against coffee: Tea is the healthier alternative