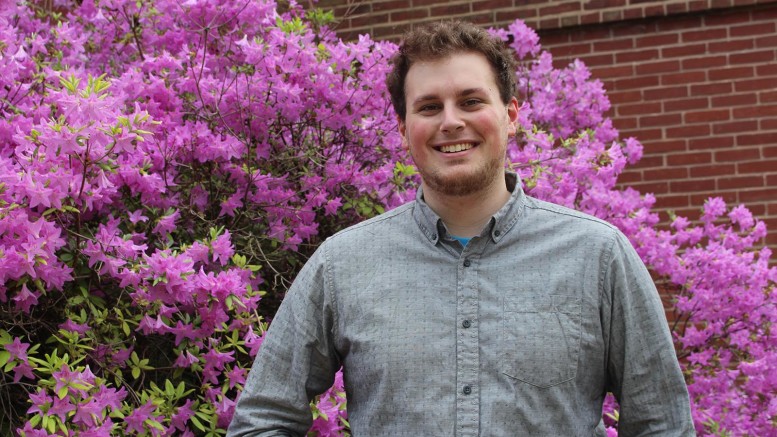 For Free Press Co-Editor-in-Chief Atticus Rice, working hard comes naturally. In just the four short years he spent at McDaniel, Rice applied himself in two majors and a minor, held multiple jobs, and served in office positions within a dozen different clubs.

“I tend to say yes to everything, so my biggest challenge has been overcommitting myself and ending up stretched too thin,” said Rice. “Pretty much every semester I somehow took on yet another few things to do, which caught up with me a few times. This isn’t to say that I don’t like all the things I do, but rarely a day or week goes by where I didn’t wish that I was able to turn down opportunities rather than take them all on.”

Despite feeling overcommitted, Rice has shown his aptitude for handling it all time and time again, celebrating many successes both on and off campus. He’s led organizations such as the Honors Program, Alpha Phi Omega, Lambda Pi Eta Communication Honor Society, Alpha Lambda Delta First-Year Honor Society, Green Terror Ultimate, and our very own Free Press. Rice was also an editorial intern at Baltimore Magazine, a campaign intern with Emily Shank for State Delegate, and a marketing intern for Advantage Internet Marketing while juggling a full course load each semester.

The hard work inevitably came with challenges along the way, but also paid off in the form of memorable experiences.

“Coming to McDaniel was one of the best decisions I’ve made so far, and I’ve enjoyed my time immensely,” said Rice. “From amazing friendships to the incredible opportunities and connections, I’ve felt that every second was worth it.”

So many challenging and exciting opportunities make choosing just one favorite memory difficult.

“I think my best memory comes down to having fun with some amazing people while being myself,” Rice said. “Whether that was trekking through the jungle, traveling around the state to meet APO brothers, or taking some wacky class with a friend just because, it’s been all about the people. McDaniel has a lot of good ones.”

And Rice’s hard work ethic won’t end after graduation. He plans to work for a year or two before pursuing a master’s degree in either public policy, journalism, or higher education administration.

“I’m pretty sure I’ll be happy with whatever I end up doing and I certainly don’t plan on having one career,” he said.

He encourages current students to know their limits when agreeing to new opportunities, but still put themselves out there.

“Say yes, but know when to say no. Alternatively, stay on top of things,” said Rice. “There are few assignments or extracurricular projects that I didn’t do at the last minute. While it all worked out in the end, I can’t imagine how many more times I could’ve cycled through The Office if I had stayed on top of my work.”