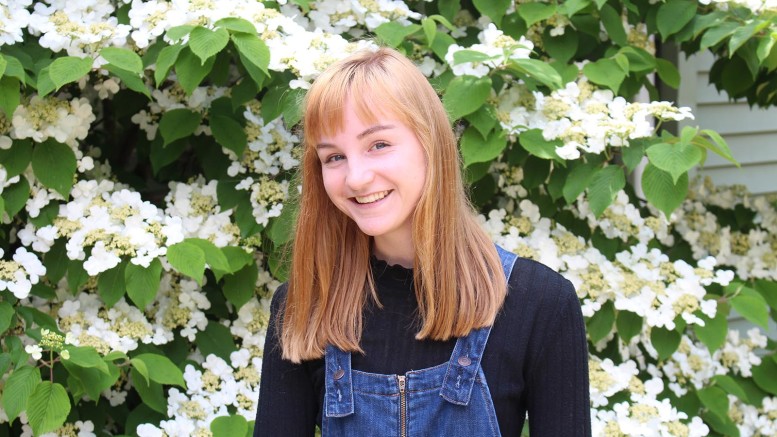 Emma Carter, Free Press co-editor-in-chief, will be graduating at the end of this semester with majors in French and communication.

She has been on staff of the Free Press for all four years, one as a staff reporter, two as features editor, and this final year as co-editor-in-chief.

“Getting involved with the Free Press was kind of a fluke,” she admits. “I signed up at the involvement fair as a freshman and just kept coming to meetings. Since then, I’ve had an incredible time reporting and learning about journalism. The Free Press has become really special to me over the past four years.”

While on campus, she worked as a tutor both in the Writing Center and in the French department. She has also been involved with History Club and has served as their secretary for three years. She also served as co-president of French Club for one year.

Carter quite enjoyed her time on the Hill.

“Aside from a lot of really engaging courses and great relationships with professors who you know have your best interests at heart, I’m not sure there’s anything better than living with your best friends or living a 30-second walk away from their dorm,” she said.

Friends were especially important to her, and a notable experience that stood out in her four years was one specific post-all-nighter Dunkin’ run in her junior year.

“When we got back to campus, delirious and giddy from a complete lack of sleep, we were walking across the North Village quad and just keeled over with laughter, our giggles echoing across North Village at way-too-early in the morning.”

She cites Martine Motard-Noar, Ph.d., and Silvia Baage, Ph.D., in the world languages, literatures, and cultures department as two wonderful mentors who have helped her to grow and follow new opportunities.

“They are always encouraging and supportive of my college endeavors — outside of French, too — and they’ve been there to give me an extra nudge when I could use it for things like switching my French minor to a major and applying to study abroad,” she said.

Her time at McDaniel was not without challenges, however.

“My first year or so, I struggled with giving myself enough time to breathe in between all of my assignments and obligations,” she said, “And I would end up being so stressed and hard on myself, which I don’t think is uncommon for college students.”

She was able to power through.

“Eventually,” she said, “I started giving myself more breaks and time for fun, which helped me realize the importance of having an even balance of school and social life.”

Carter has some sound advice for her younger self, should be be able to go back to her first year.

“Where life takes you is going to be surprising at times. You’re going to find, or stumble across, things you never thought you’d be interested in. Really dive into these, whether they be classes, extracurriculars, or something else. Don’t feel bad about getting excited about something that wasn’t in your original college plan.”

After graduation, Carter is moving to Lille, France (about 150 miles north of Paris) to be a teaching assistant for English classes in middle and high schools until the spring of 2020.

“After that, who knows!” she said.