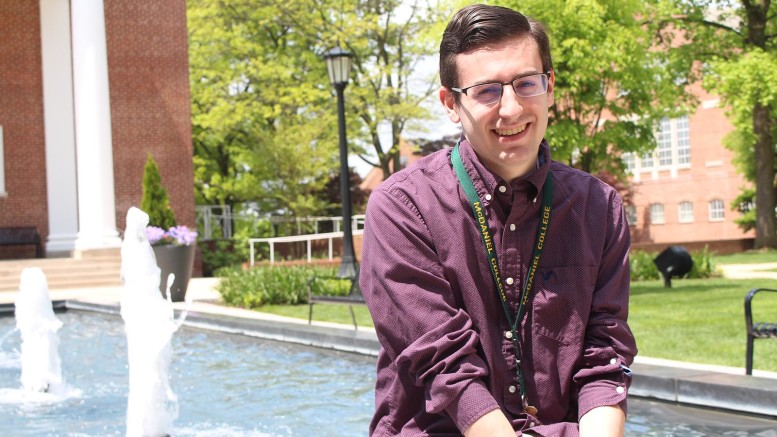 With his final semester drawing to a close, Spenser Secrest looks back fondly on his college career.

Secrest will be graduating with an English major and a history minor, having finished his degree with the capstone paper “The Sound and the Fury of Cultural Hegemony in Macbeth.”

He has held several roles at the Free Press since he joined his sophomore year, including staff reporter, assistant editor, and news editor. Additionally, he served on the editorial board of the campus literary magazine, Contrast, his junior and senior years. Beyond these organizations, he focused on academics and attending various campus events with friends.

During his studies, Secrest gained several mentors in the English department. He had his First Year Seminar with Professor Spence, and continued on to have two more classes with him. He also considered Dr. Zajac a mentor, and took four of his courses throughout his time at the College. He also took four courses with Dr. Mary [Bendel-Simso] on a variety of topics, including senior seminar and an independent study, which allowed him to get to know her.

Secrest said he generally enjoyed his time at the college.

“Being at any place for as long a time as one is at college, one realizes that there will inevitably be good and bad days,” he said. “However, I can certainly say that I have absolutely enjoyed my time at McDaniel, and that the good days far outnumber the bad days, and that McDaniel absolutely deserves to be one of the colleges that changes lives, as it has certainly changed mine for the better.”

Like all students, Secrest overcame some challenges while at McDaniel. He had some issues with housing during his years, but was able to find a good living situation for his senior year.

When asked for his favorite memory, Secrest found it a difficult question.

“As trite and cliche as it is to say, I honestly don’t know if I can single out one favorite memory,” he said. “Certainly, I have enjoyed all of the time I spent with my friends, whether it was having fun and socializing on the weekend, or even just doing work for different classes during the week together.”

Secrest has not finalized any plans for post-graduation life, as he still needs to hear back from several positions to which he has applied. Ideally, he would like to work as an editor or writer somewhere.

While admitting it sounds cliche, Secrest tells incoming students to make sure to enjoy their time on the Hill, as it goes by faster than it seems.

His parting words to the College double as a recommendation: to read the novels of William Faulkner, and to watch the films of Ingmar Bergman.