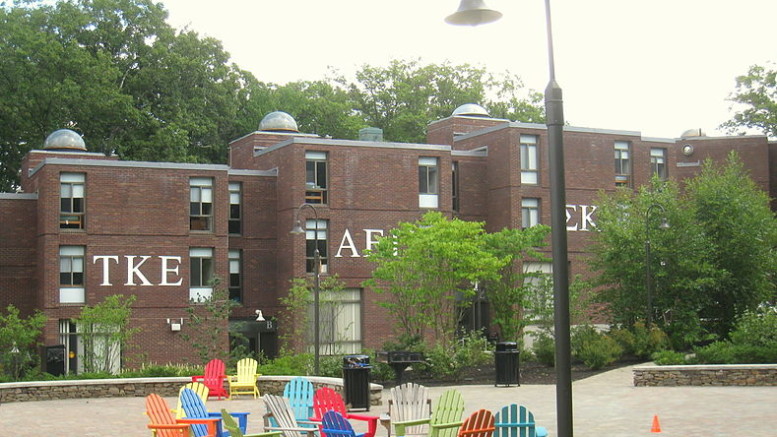 The idea that a certain number of unrelated women living in the same residence officially designate said residence as a brothel has been circulating college campuses for years. The myth is often used as an excuse by students to explain why their college lacks specific housing for Greek-lettered organizations. But the myth is just that – a myth.

Columnist Richard Roeper in 1994 called it “The most widespread piece of university folklore making the rounds” and could document it on at least 100 campuses.

While, McDaniel hasn’t been immune to the myth, the claim is as unsubstantiated on the Hill as it is anywhere else.

“I have never been asked to enforce anything like that,” Associate Dean of Students Michael Robbins said of the brothel label.

A review of Maryland, Carroll County, and Westminster housing and zoning codes reveal no restrictions.

County officials can confirm that nothing in Carroll’s code places any restrictions on any number of women living together in one dwelling on the basis of being labeled a brothel, or anything of the like.

As reported by Snopes, the myth is likely derived from a time where blue laws prohibited things like shopping on Sundays and many new zoning laws were being put into place.

Matt Soniak reports in Mental Floss that the “law has been recorded since the 1960s – a decade that saw a huge uptick in the number of women attending college.”

Still, there are no records found that ban a certain number of women living together on the basis of the brothel label.

Some jurisdictions do put limits on who can live in what type of residence, but those laws usually exist to limit how many people can inhabit a single-family dwelling.

“Even in communities that carry such housing restrictions on their books,” writes Snopes, “sororities and fraternities are exempted from them.”

One particularly pervasive variation of the myth says that Pennsylvania has specific laws still in place that prohibit sorority housing so as to avoid any legally defined brothels. This has been debunked by Pennsylvania State University, which also makes clear that, while State College has zoning laws similar to those in Westminster and Carroll County, none of them have specifications about Greek housing.

Another version suggests that sorority houses with more than five women with alcohol present are given the brothel label, as reported in The New York Times.

A review of the National Panhellenic Conference Policies and Best Practices says that any policy dealing with substances comes from voluntary policies created by their 26 sorority members.

Additional information provided by the NPC also points to the fact that an absence of alcohol in living environments leads to lower insurance premiums.

Robbins echoes the NPC, saying that the designation of an official sorority house would surely cause insurance rates to go up.

It’s not uncommon, he says, for multiple women in the same sorority to all rent a house together.

In this vein, the College offers Greek-lettered organizations the option to be assigned to a floor or wing of an on-campus residence hall to allow their members to all live together rather than getting a house on or off campus.

“This enables them to stay easily connected with one another and still access the various services on campus easily,” the College policy reads.

Policies like these are becoming more common at colleges, though not many chapters tend to exercise them. Currently at McDaniel, only Phi Mu has official on-campus housing, on the first floor of Albert Norman Ward Hall.

PSU offers similar options, but allows their Greek-lettered organizations to rent suites from the University, a practice that started in the post-war era as the price of off-campus housing soared.

No matter the explanations or policies put forth, it seems that this myth is one for the ages, and one that colleges just can’t shake.