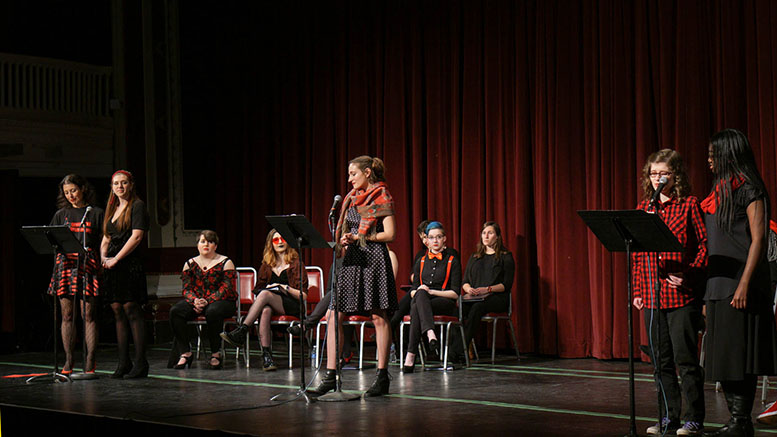 On Feb. 23 and 24, McDaniel College hosted its fifteenth annual performance of the Vagina Monologues in Alumni Hall.

The play, written by Eve Ensler, was directed this year by senior Megan Smith and featured sixteen female McDaniel students, along with adviser Dr. Becky Carpenter. The play touches on issues of feminine expression, cultural misogyny, and sexual violence, making it a sometimes tough, but also essential viewing, especially as movements confronting these issues seem to be a major aspect of the national political zeitgeist.

The lineup for the show featured a selection of various pieces, including “They Beat the Girl out of My Boy,” performed by Becky Carpenter, Colleen Clark, Jennifer Willard, and SG, “Hair,” performed by Jill Betchel, and “The Woman Who Loved to Make Vaginas Happy,” performed by Bailey Rose Boyle.

During each monologue, the rest of the cast not performing would often yell out callbacks as a form of expressing their thoughts and solidarity. These ranged from jokes to supportive affirmations towards those performing.

The show also featured personal narratives at the end where members of the cast recounted personal tales surviving sexual violence. The stories allowed cast members to open up about past experiences in a supportive and safe environment and fit with the theme of the show.

Around this same time, audience members were called upon to stand if they had been victims of, knew someone who had been a victim of, or would be allies in the fight against sexual assault. By the end of this, the entire theater was standing in solidarity.

Many of those who performed expressed that they were positively affected by their participation.

“Vagina Monologues is a show that will make you laugh, cry, and think. Some pieces will move you to tears, others will make you laugh so hard you cry,” said Gianna D’Avella, who performed “The ‘Wear and Say’ Lists,” and “Not-so-Happy Fact.”

“It is a show that at its most basic form is about female empowerment, it is about sharing stories from women that others can relate to and feel,” she added.

It was also announced that next year’s director of the show would be Patsy Zetkulic.

As the show touched on issues of sexual assault, representatives from the Rape Crisis Intervention Service of Carroll County were outside of the theater, available to speak with attendees.