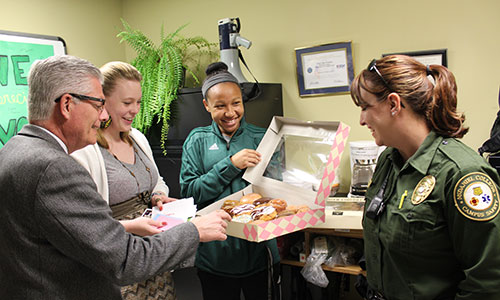 In this photo from McDaniel College, now retired Director of Campus Safety Mike Webster and Officer Misty Brown enjoy donuts and thank you cards delivered to them by Leigh Brownell and Nicole Hill during McDaniel Staff Appreciation Week in April 2014. 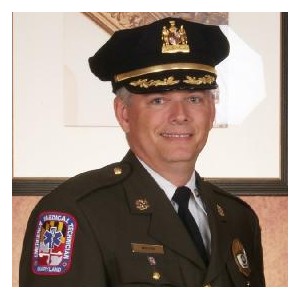 As 2014 drew to a close, McDaniel saw the departure of Mike Webster, alumnus, adjunct professor and head of McDaniel College Campus Safety. Webster had served in the position of director for 23 years, and during his time had worked with the College to ensure the smooth operation of the campus safety department in all its activities, from crime prevention to emergency medical services for students and faculty.

Webster stated that his departure from McDaniel was planned and that it coincided with his reaching McDaniel’s retirement age of 55. He has enjoyed his time at McDaniel, and jokingly noted, “I wouldn’t have stayed if I hadn’t enjoyed my time.” He remarked upon the great community at McDaniel, and how, despite the challenges presented by the job, he was always happy in the position.

Webster also recalled how when he arrived at the College, it had less than 1,000 residential students and the floor space was around two-thirds of what it is now.

However, Webster is far from slipping into a quiet and laid back retirement. For the past four years, he had been working part time for Margolis-Healy and Associates, a campus security consulting firm that works with higher education and K-12 institutions. He has now accepted a full-time position at the firm.

In his new position, Webster will work with the firm as the director of regulatory compliance. He will mainly be focused assisting colleges in ensuring that they are compliant with the Clery Act and Title IX. The Clery Act deals with the reporting and disclosure of criminal acts on and around campuses, while Title IX deals with gender discrimination on college campuses.

As for the future of McDaniel Campus Safety, Webster states the plans are for the College to appoint a new director by the middle of the summer, once a thorough search has been conducted and a suitable candidate has been chosen. Until that point, the assistant director will carry out daily administrative duties, and other duties will be divided amongst other members of the department. It was emphasized that despite the changes, students will continue to receive the services they have come to expect from Campus Safety during the interim period.

The Lighter Side: Students do more than study over jan term