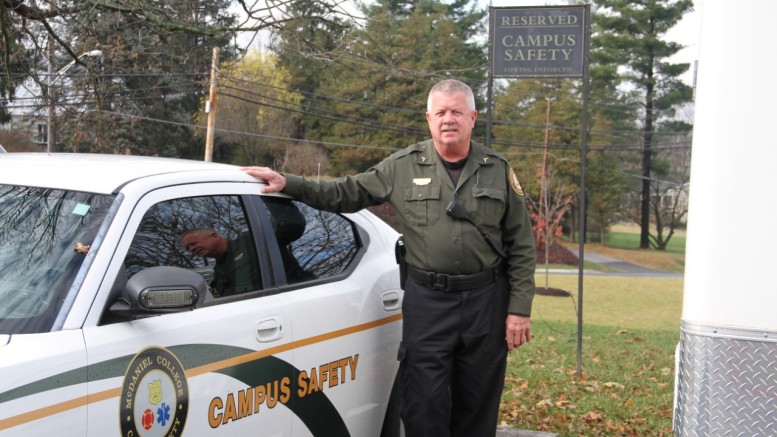 McDaniel students are aware that they have a Campus Safety team looking after them. But most students don’t know who they are.  Jim Brady is one of our officers—he has plenty of experience and is always here to help.

Officer Brady has been working for McDaniel Campus Safety for about four and a half years. Before, he was a liquor inspector in Montgomery County for 14 years, and a Police Officer in Prince George’s County for 23 years.

One might ask how a man with this much experience ends up at McDaniel College. Brady’s daughter was one of the reasons he came to McDaniel. After Brady’s daughter graduated with an undergraduate degree from Hofstra University, he received an appealing offer.

He’s gained much experience from his work before coming to McDaniel, including a few funny moments during his time as a liquor inspector.

A “normal” day for Brady starts at 6 a.m. He always works the morning shifts, which last 10 hours. This is what a typical day for the officer looks like:

“I start my day be relieving the night shift and finding out what happened the night before. Then, around 7 am we gas up the vehicles. 8:30 a.m.—supervisors come in and I touch base with them about what is going on. During my day, the most common call is lockouts [when students get locked out of their rooms]. I also get calls to take students to urgent care, and other minor medical calls.”

Brady describes other daily scenarios, too.

“I respond to all alarm calls, such as smoke detectors, which are normally set off by the students cooking. I take reports of any nature at the location in which the incident occurred.”

He can also clear up the rumor going around that Campus Safety is moving off campus and teaming up with the Westminster Police Department (WPD). This is not entirely true. Campus Safety’s location is moving to the building across from the Gardens Apartments, which used to be a dentist’s office. McDaniel now owns this building. The move is planned to be in December.

As far as teaming up with the WPD, Campus Safety is not. Brady says that sometimes, when there is violence on campus, the WPD may ride along with Campus Safety, but that is the extent of their partnering with the WPD.

McDaniel, we may not know all of the officers as well as we now know Officer Jim Brady, but we should know that no matter how they ended up at McDaniel, they are always here for us. In the words of Brady, “Campus Safety as a whole is always here for the students, no matter the situation.” They are “here to assist you in any way you need assistance. If you have any problems, feel free to come to the Campus Safety office and talk with any officer.”