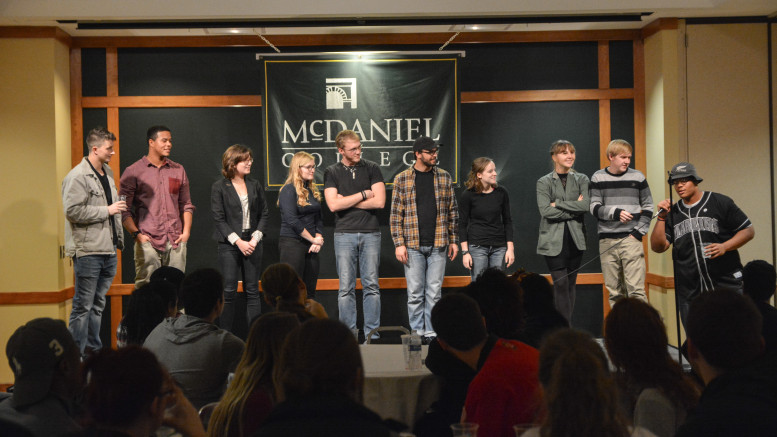 On Dec. 1, Dangersauce hosted “Belly Full of Laughs” in the Forum, with the help of Green Terror Productions. With their dedication and outstanding talent, Dangersauce managed to put together one of their best shows yet for an end-of-year blowout. 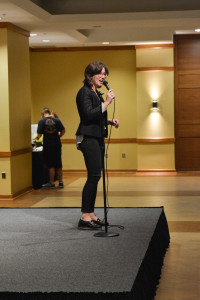 The event began with Darby Bortz performing a stand-up skit about her family during Thanksgiving break, and her “problems” in finding which family role she would best fit. After this riveting act, the audience was treated to an improv game called “Aside,” where members of the show were forced to do an aside during a skit. It included a not-so-innocent “Little Jimmy,” (Jason Swartz), who ended up becoming one of Santa’s “little helpers” at the end of the skit. Santa (Allison Parker) himself proved undeserving of the “nice” list, considering his innuendos about the “packages” he needed to deliver. “Aside” also featured a delivery elf (Jeb Shingler), who turned out to be more than just a helper for Santa. All in all, it turned out to be quite a spectacle.

After “Aside” came another round of laughter from Duane Lucas’ stand-up about his experiences with birthdays and strip clubs. Duane’s act was followed by a series of short skits inspired by one of the audience members. Notably, naughty Santa and his helpers made a return, Camden Ostrander and Maryanna Lynch played a reluctant kangaroo and its overeager passenger, Lucas and Ben Kahn performed a skit involving simple math and lots of weed, Bortz and Allison played tour guide and a provocative transfer student, and both end up blazing it up and smoking that herb with Duane and Ben.

Following this series of skits, Kahn performed a stand-up skit involving “smooth” joke transitions and his idea for a blockbuster film about the life of “Jumbo-tron” and his love affair with “Amazon Prime.” This film would be a romantic sequel to the popular Transformers movies; I think you can guess where this is going. 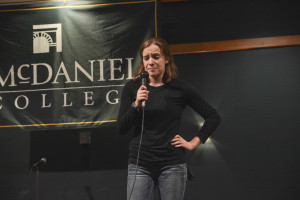 Mable Buchanan rounded out the night with a stunning rap about “Honest Tea” and her addictions.

The Dangersauce show wasn’t the longest event on campus, nor was it the best-advertised, but it was the stress relief that some students needed. Janette Carpio, sophomore, said that “this semester has been especially difficult for me, so going to the show really helped me take my mind off classes and have a good laugh.”

Another student said that “the college tends to have a lot of serious events. It was nice to relax a little with the dread of finals looming over us.”

Dangersauce had one mission, and it accomplished it spectacularly. The performers (Duane Lucas, Jeb Shingler, Josh Bussiere, Andre Henry Jr., Ben Kahn, Darby Bortz, Allison Parker, Jason Swartz, Maryanna Lynch, Mable Buchanan, and Jehan Silva) were fantastic, the show was lively, the food was amazing, and the night was magical. We hope to see more from them, and more from the McDaniel community as a whole, in the future. 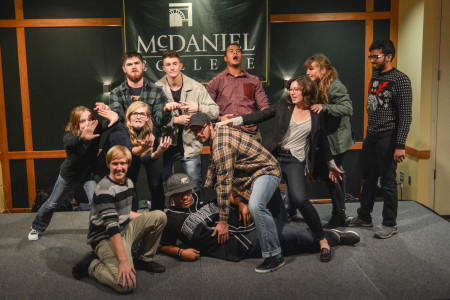 Dangersauce members pose as a group. Photo by Kyle Parks.

McAdvice: A New Column Within Commentary