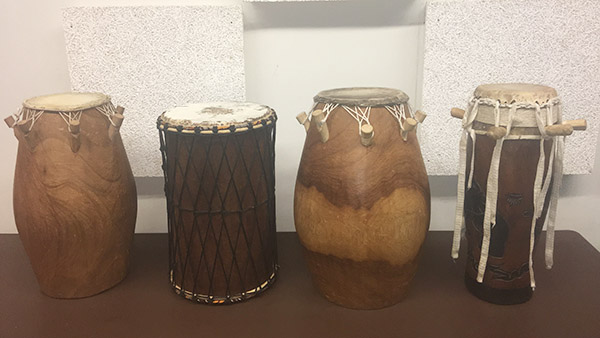 A set of drums used during the drumming class. Photo by Eric Grantland.

McDaniel College offered a music course, Global Drumming Traditions, during the 2016 Fall Semester. Not only did this class teach students how to play the drums, but they also got a taste of West African culture. The course was taught by a Senegalese Griot Paco Samb.

Samb grew up in Senegal, learning to play the drums, and came to the U.S. just a short time ago. Samb originally came to the U.S. to perform with his band and once he got here he never left.

The class had the opportunity to perform on stage alongside Samb on Dec. 8 in the Forum. Every seat in the crowd was filled and many others were standing in the back. The performance was nothing short of entertaining, as he and the class performed two separate Senegalese songs. Samb’s enthusiasm livened up the entire room, and at one point the entire crowd was clapping along to the music.

The West African style of music is different than what we are used to in Western Culture. Americans have a very analytical approach to learning and teaching music. In American culture, in order to be a successful musician it is almost a necessity to be able to read music. We have a complex system of music notation that includes staffs, treble clefs, double bar lines, and various notes that make up sheet music.

However, in West Africa, this is not the case. “After a whole semester of playing the drums, I feel that my skills have really developed and my performance on the drums have greatly improved, but I still could not read music to save my life,” says senior Austin Fry.

Fry was in the drumming class and was part of their performance. “The thing is, I didn’t have to learn to read music to play the drums the West African way because they take a different approach to learning it. The best way that I can describe it is that it is all about ‘feeling’ the music.”

An interesting characteristic of this drumming style is that each and every drumming part comes with vocals as well. You really don’t even need to physically play an instrument to play your part. You can just sing it.

“The best way to do it is to sing the parts in your head as you are playing. If not, it is easy to lose track, especially when [Samb] is playing his solos,” said Fry. And believe me, Samb’s drum solos were very impressive.

The music and culture in West Africa is all about bringing people together and bonding with one another. It is about the community as a whole. You could tell from the performance that everyone on stage was in sync with each other and having a great time.