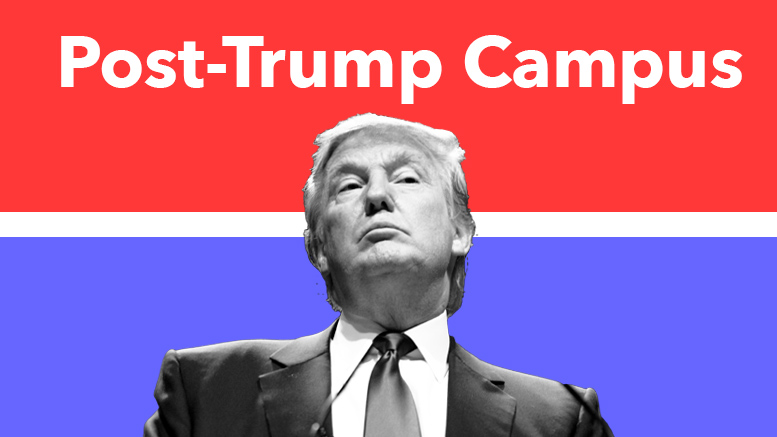 The election of Donald Trump as the 45th president has had a visible impact on the student body of McDaniel, no matter their political views or affiliations. The November election saw some students celebrating and others taking to Red Square in protest. Among all classes are students who view the future with a sense of uncertainty and concern, whether it be about their safety, the safety of others, or the future of the country as a whole.

These mixed opinions present a unique challenge to the administration of McDaniel, one that Web Editor Stefan Specian discussed with President Casey last fall. To further this conversation between the administration and the student body, we sat down with Jose Moreno, head of the Office of Student Diversity and Inclusion (OSDI), to see how his office and others will be handling this new, post-Trump Campus.

The conversation stuck to a theme central to Moreno’s jurisdiction, OSDI, as he spoke of his role in making students comfortable with the new changes throughout the country.

“I’ve had conversations and I’ve heard some of the concerns and I want to address that,” said Moreno about discrimination, “but I’ve always talked about that this is not my office, that this is our office. Whether it’s faculty, staff, [or] students, I encourage everybody to come in and talk and see how we can work through things.”

Referencing his conversation with President Casey and Dean Gerl in November, he spoke of the administration’s desire to start a series of programs related to the election, awareness, and bringing people together.

“We’re looking into programming,” said Moreno, “We’re going to be a lot more intentional about, you know, trying to get as many answers and as many questions answered as possible.” He emphasized that these programs would not be about voting for one party or another or “I won, you lost,” but that they would be about coming back together after the divisive election.

“This election period, the 18 months leading up to [the election], was very divisive. It was very different in terms of conversations between people, different parties, the separation or the divide. It got to the point where I was uncomfortable,” Moreno highlighted. Moving forward, he wants these programs to be able to show that we’re stronger together.

Similar to what President Casey said in his interview, Moreno spoke about how important it is to make these programs as educational as possible and to make sure people of differing views are present in order for students to learn from one another.

“It’s okay to not agree on everything,” said Moreno, who added that “open dialogue” was key and that “there’s nothing wrong with having a difference of opinion.” He did make it clear that some people don’t know how to react to that and we, as humans, tend to go on the offensive, accusing others of attacking ourselves. “I think that we need to do better, at least in this office, in really challenging the idea and not the person,” he added.

Moreno continued his dialogue, emphasizing the importance of how conversations shouldn’t focus on who people voted for, but why they voted the way they did, their thoughts on the election, and what they voted for, making sure to not accuse anyone of voting for something without hearing their reasoning first.

“I think [bringing people together] is something that McDaniel does very well,” said Moreno, referencing United, a yearly program that is produced through a joint effort of many student organizations, saying that “There’s a reason it’s called United.”

“If there’s a tragedy or an issue that people need to come together to resolve or just to have that partnership, to have people lean on each other for help and assistance and support, McDaniel does a good job of that. I think that’s the focus we need to carry through; we cannot divide ourselves any more,” Moreno concluded.

Getting into specifics about programs to expect this spring, Moreno noted that he has already met with some student groups and organizations on campus, specifically the League of Latin American Citizens (LULAC) and the Progressive Student Union (PSU). “[We] have talked quite a few times and we’re getting the ball rolling,” he said, mentioning that PSU suggested to wait until after the inauguration because “we’d be back from the holiday break and we would have a better sense of how things are going.”

In his closing comments, Moreno said that he has heard from several students who have had legitimate fears about some people in certain communities and if they were going to be subject to any issues of racism, homophobia, and other forms of discrimination. While he agreed that McDaniel has a fairly welcoming campus, he noted how it was important that campus community members feel comfortable going out to broader communities like the City of Westminster, Maryland as a whole, and their hometowns.

Lastly, Moreno responded to a question about the role of SafeZone and the possibility of a sanctuary campus, offering his thoughts on both the matters.

“SafeZone is about being an effective ally for students or community members that identify as LGBTQ+,” said Moreno. A program that has been in place for years, he said that OSDI hoped to open up a training for all members of the campus, not just faculty and staff, as has been the case in the past.

While he couldn’t speak for the administration about what a sanctuary campus could for do McDaniel or the likelihood of it happening, Moreno did speak out from his past role as an admissions counselor at another college, saying that “Legal status in the United States shouldn’t prohibit anyone from having a quality education.”

Throughout the entire conversation, Moreno assured students, and all members of the community, that he and the administration are open to meeting with students, student organizations, and marginalized groups who would like a place to discuss the changes coming to this country and how it might affect us all.