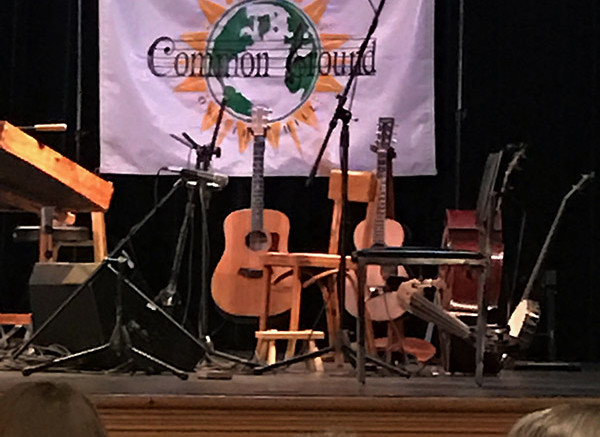 Carroll Arts Center's stage prior to the concert. Photo by Lindsey Miller.

McDaniel College and Common Ground on the Hill presented its annual holiday concert at the Carroll Arts Center featuring Walt Michael and Company on Dec. 3 at 8 p.m.

Smith brought his unique sense of humor to the performance. He, at one point during the concert, said, “This song is in the key of F, which is the devils key. So I will be playing this song in the key of G.” This drew a loud chuckle from the crowd.

Michael said about Smith, “Tom Smith is an authentic Scottish folk musician and singer, who is unique. For years he toured Europe, the U.K. and the U.S., playing in a variety of ensembles, focusing mostly on Irish traditional music, both instrumental and vocal. His baritone voice is well known among traditional musicians.” Michael and Smith have been friends for years. Michael went on to say, “I first met Tom in Scotland at the Girvan Folk Festival, and subsequent trips to Scotland had us playing music together from time to time.”

The rest of the company was made up by Frank Orsini on the fiddle, mandolin, and viola, Tom Wetmore on the bass, Rob Caswell on the guitar and banjo, and Ralph Gordon on the cello.

Michael said about the concert, “I felt good about the performance. It was great to get together with musicians whom I have known for as much as 35 years. It’s a very rich experience musically and personally.”

Michael has had a successful 40-year music career that has seen him play in the U.S., Canada, and through Europe. He has performed on every major TV network and on Broadway. He has also performed at the White House, the Lincoln Memorial, and the Kennedy Center. Michael’s career was highlighted by his performance in the closing ceremonies of the 13th Olympic Winter Games held in Lake Placid, New York.

Michael is the founder and Executive Director of the Common Ground on the Hill. He is also a professor here at McDaniel College.

Common Ground on the Hill was started 23-years ago by Michael, with the vision of using folk music to work towards human understanding, tolerance, fulfillment, and enjoyment. They provide multiple concerts throughout the year, capped off by the two separate Traditions Weeks held here at McDaniel College.

Michael said, “Common Ground on the Hill is now in its 23rd year. This means that there are many faculty [members] who know us from our beginnings as well as many who don’t know much about us at all. Over the years, many faculty have taught in our Traditions Weeks in the summer, and have performed in our year-round concerts series.”

While Common Ground has been able to reach the faculty, Michael is hoping to reach out the students on campus more. He said, “In general, it is very difficult to get the attention of McDaniel students because they are understandably so immersed in their studies and social life. We would love to see more students get involved in what we do including taking our summer classes in art, music, film, dance and more. They could earn credits and have perhaps the most enjoyable week possible on the McDaniel campus. I would love see a students take the initiative to work with us and help enrich the campus life with our work that has stood the test of time for almost a quarter of a century.”

Music Review: “What Do You Mean” Justin Bieber Is Coming Back?