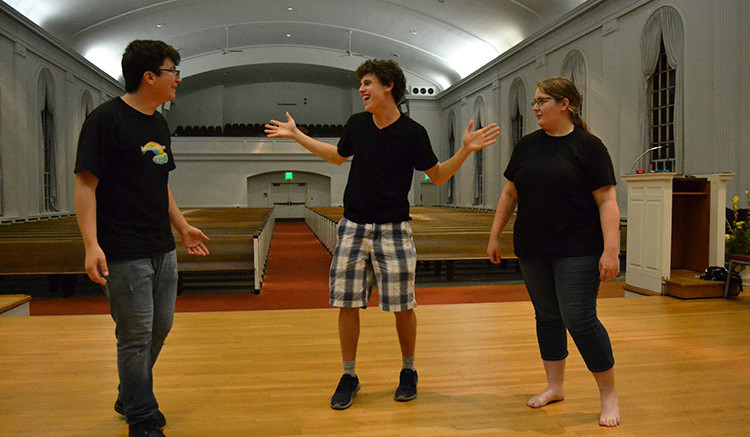 Despite a significant loss in numbers since last semester, returning members of Dangersauce, McDaniel’s improv comedy troupe, banded together last Friday night to put on the first show of the year in front of a packed audience.

“This year is an interesting one, as we lost almost 10 seniors,” said Dangersauce President Rachel Gunnerson. “Currently, our group is small, which gives us a lot of space for individual growth, but we are excited to audition in some new members this week.”

With only five returning members, Dangersauce was challenged during last week’s show to think faster on their feet than usual and to work together to present a lively set of games for the audience.

The show started off with a classic game called “Freeze,” where two members began to act out a scene until another member of the troupe yelled “freeze,” took one of their places, and continued in that position with a completely different scenario.

Other improv games included “Scenes by Dre,” a musically-driven piece, and “New Choice,” where members in a scene had to choose a new word or phrase each time the caller asked them to. Many of the games included all five members, with little room for rest between segments.

The night ended with a new performance called “Foursquare,” where members paired off with overlapping plot lines and rotated between several scene segments. With each rotation, a new object, occupation, problem, or place would be introduced. With Gunnerson calling the rotations, the remaining four members performed the work of eight people.

Nonetheless, Gunnerson remains optimistic for the year ahead.

“I’m so grateful to all of Dangersauce’s graduated seniors and I miss them a lot,” said Gunnerson. “Still, I can’t wait to see what will be in store for us this year.”