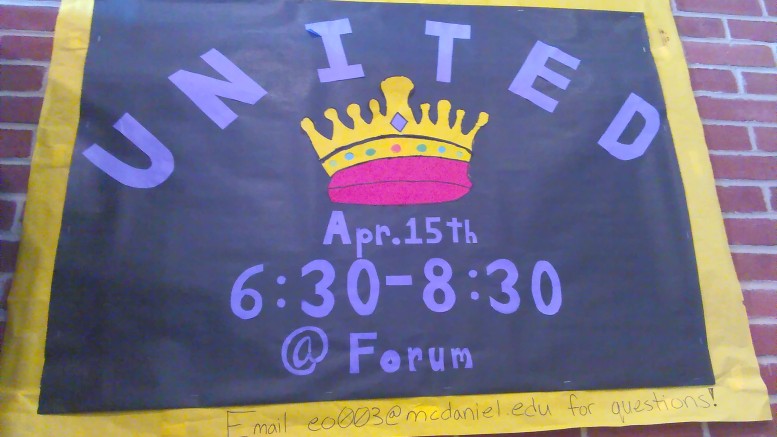 The evening of Friday, April 15 was one without precedent, as many organizations held events that demonstrated the talents and cultural awareness of McDaniel students. One such event was United.

United, organized by Africa’s Legacy, brought together a number of cultural and diversity organization on campus, including Allies and Hispanic-Latino Alliance, in order to showcase the diversity on Campus.

Along with food and performances of all sort, United was able to bring a number of students and members of the community to the event, despite the fact that many other events were happening simultaneously.

Even though I was not able to stay for the entirety of the event, I can tell that from the beginning the event was going to be amazing. The doors were open 30 minutes before the event started, which gave me a welcoming feeling, as I was finding a seat whilst performers shuffled around, some of them practicing their moves.

The event was opened by a dance performance from Africa’s Legacy, the main organizer of the event. The music alone was cause to celebrate, but the dancing from the dancers provided the enthusiasm needed to make this event an even greater celebration.

I had to leave right after this dance, but as I walked out, all I could hear was the roar of the audience as the second act of the night came onto the stage.

Overall, I must say that the 20 minutes I spent on the event were spectacular, and I wish I could have stayed later. I definitely hope United returns to McDaniel next year.