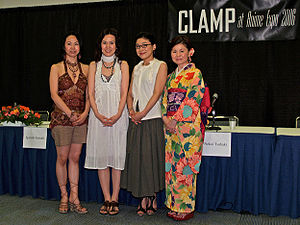 Clamp is an all-female, Japanese manga artist group consisting of artists Nanase Ohkawa, Tsubaki Nekoi, Satsuki Iragashi, and Mokona. The group started in the mid 1980’s as a Dojinshi—a self-published work—and contained eleven members. By 1989 the group was reduced to seven artists, and in 1993 three more left, leaving the current members of Clamp.

The group is best known for their production of manga targeted to young female readers, but they have also produced works that target the male audience. Unlike other manga artists, Clamp doesn’t focus on one specific genre; rather, it has produced works on a variety of genres—including comedic works such as CardCaptor Sakura as well as more dramatic works, such as XXXHolic—thus being able to appeal to a broader audience.

Their style is very unique and different from that of other artists, as the group—being an independent Dojinshi—had to learn on their own. One of the most outstanding and noticeable features about their style is the use of negative space as well as the eye-to-head-to-body ratio.

One of the main themes that Clamp explores is the theme of fate and soulmates, as it can be seen in their most iconic couple, Sakura and Syaoran from both CardCaptor Sakura and Tsubasa Chronicles. Other than that, Clamp doesn’t really stick to one theme but rather explores different themes throughout and within their works, presenting a different theme within each new story arch.

Writer of the Week: Bob Dylan