At the beginning of Spring Break, the McDaniel student body received their annual tuition letter, detailing the rises in costs across tuition, room and board for the following semester. However, this year, the letter was a source of greater controversy than usual, due to some of the justifications put forward by the administration.

President Roger Casey was quick to note that only these changes have been approved as of this point.

“What I think we need to make clear at this point in time is that our Board approves the [complete] budget in a series of steps,” said Casey, “at their February board meeting, they approve the amount of tuition, room, and board charges for the coming academic year…what’s been approved by the board and what I can talk to you with absolute certainty about now is what is the tuition, room, and board charge for next year.”

He explained that the goal of the administration and the Board of Directors was to limit costs as much as possible, while preventing any form of revenue shortfall. He noted that there are faculty and student representatives on the board who also advise them in their deliberations.

Casey also spoke in greater detail as to how the Board and administration decide on what changes to make. He detailed a spreadsheet of twenty colleges, which he stated are used as comparisons for McDaniel. 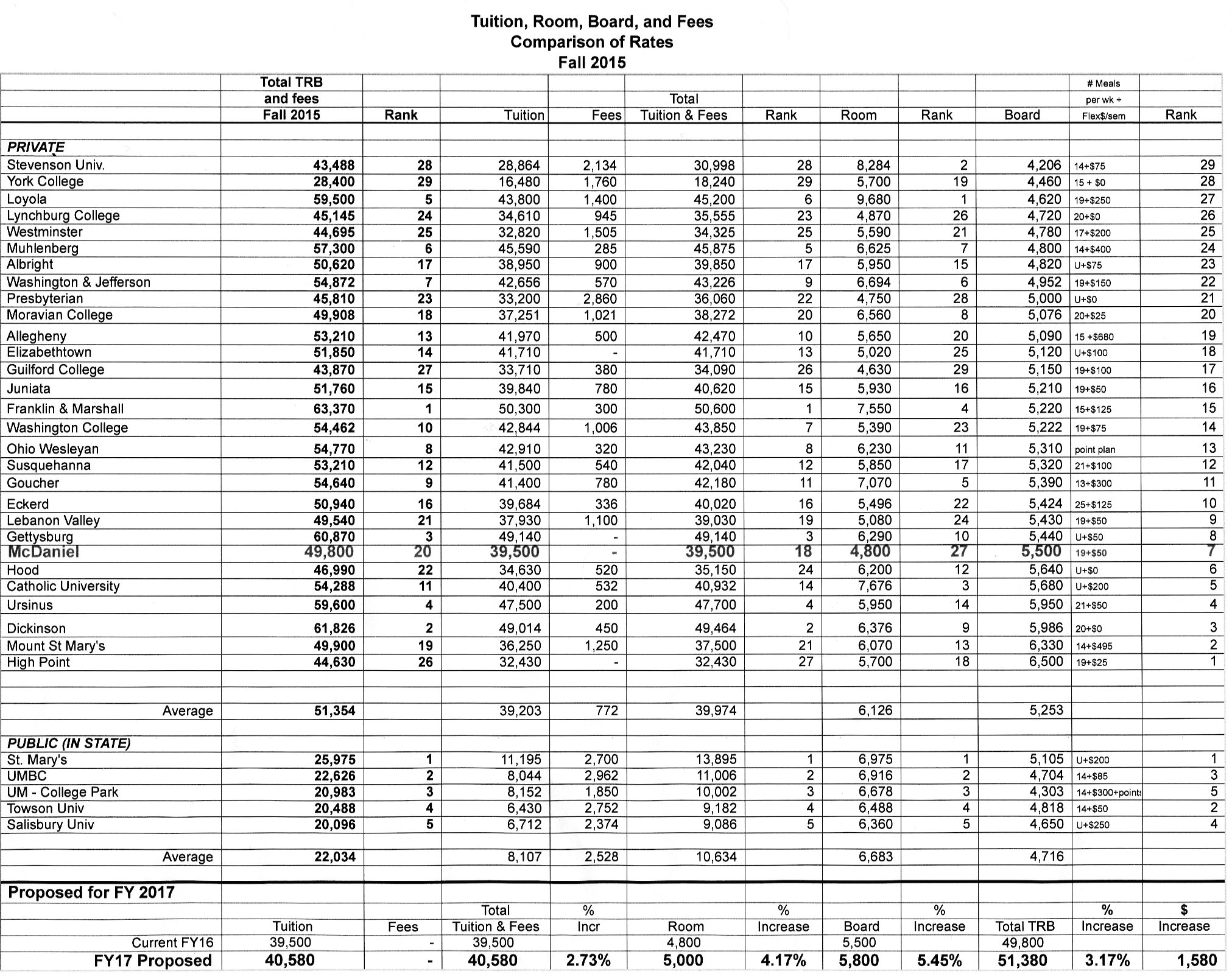 The full chart Casey provided. The numbers provided are from the previous academic year.

“There are twenty schools we use for every set of comparisons we do at the college, and we’ve picked those schools for several reasons. Some of them are our biggest, if you want to call them ‘competitors,’ for students,” he said, “some of them we picked just for proximity…and some of them we have almost no crossover in student applications, but in national surveys of higher-ed, these are institutions that metrically look the most like us.”

A notable point of comparison between these schools and McDaniel comes in the form of comprehensive fees. Many of the comparison schools, such as Stevenson University and Washington and Jefferson, tack on additional fees to their tuition, which all students are required to pay. These are absent at McDaniel.

Student reaction to the increase was mixed. Sophomore Tyler van Dyke was understanding of the increase, stating, “I think if we really need a tuition increase, then obviously it needs to happen.”

Senior Jess Mies states, “I know that it’s normal and the tuition of pretty much any school is going to go up at least a little bit each year; however, I think that it goes up a little bit too much.” Mies cited the salary received by president Casey as part of this.

Sophomore Will Giles asserts, “I’m not happy with it, but it’s not going to deter me from going and finishing my four years at McDaniel.” He states that tuition will have to increase so long as inflation does, despite the added burden to him and his parents.

However, one of the main concerns among students have been how much input students have in this process, and whether there is enough transparency involved.

“There’s a lack of any type of transparency in budgetary decision making at the college,” said senior Caroline Unger. “We have three administration-appointed [student] representatives that are allowed to sit in at board of trustee meetings, but are not allowed at budgetary meetings and have no actual decision making power.”

Unger, a member of the Progressive Student Union on campus, argued that her and her organization are “demanding true accessibility for this campus, which I think should be our utmost priority, and with the way that decision making is structured now, our priorities are all decided by a small, administrative elite.”

A number of students were also upset by a specific line in the letter: “The largest percentage increase for next year is in our board plan, where the unionization of our food-service workers has significantly increased the cost of our contract.”

Unger, who helped organize and is a member of the union, stated that her and her organization felt that this line “pointed towards the recent unionization of our Sodexo workers as a reason for the hike, which we think is a direct misleading of student’s anger towards the most vulnerable workers on campus.”

Van Dyke agreed. “I don’t think it was right for the blame to be laid specifically on the unionization of the Glar workers,” a sentiment that was echoed by other students. Mies, for example, states, “I think they’re trying to… find someone to blame for something that they do normally.”

Casey rebuffed these claims, however, and stated that the increase due to the union was predictable.

“When I asked students, ‘do you know the direct result if we pay more money to the people who are working there, do you realize that means that you are going to have to pay more money to go eat food there?’” he said, “and people truly looked at me as if ‘no.’ I mean I don’t know where people think the revenue would come from to cover an increased cost.”

“When 80% of your revenue comes from tuition, room, and board, that cost is going to get passed right onto the people that are using the service. And, that’s just Economics 101,” he continued, “I know I’ve had conversations with students before who say ‘we want this, we want this, we want this, but don’t charge so much,’ and it just doesn’t work that way. We just don’t have any place to go to get that money.”

The Progressive Student Union later delivered a letter to President Casey’s office condemning the changes and their justifications, and plans to host a Town Hall meeting, tentatively scheduled for April 21, with Casey and the administration present.

Halloween on the Hill: A Photo Essay