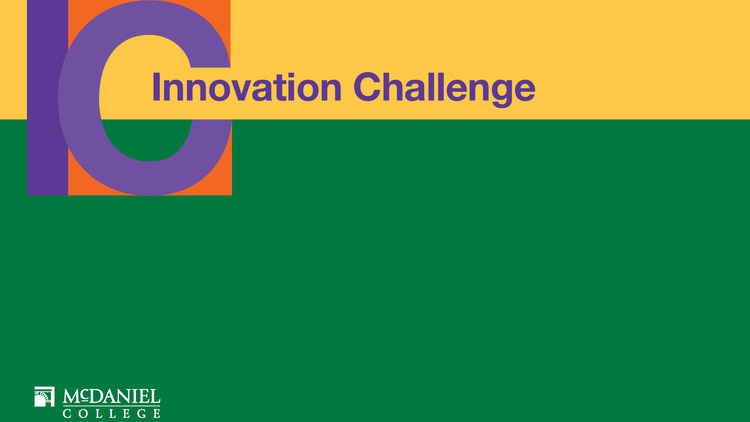 There is a new annual challenge here on the Hill: the Innovation Challenge, a competition prompting students to pitch their original ideas for the chance to win up to $10,000 to make it a reality.

McDaniel’s new Encompass Distinction is the driving force behind this competition. Jason Stambaugh, the program’s Entrepreneur in Residence, states, “the Innovation Challenge is an opportunity for McDaniel undergraduate students to pitch their brand-new business ideas to compete for [$18,000] in prizes.” Additionally, Dr. Bryn Upton, Director of the Encompass Distinction states that students will have the option to come back to campus over the summer to receive consultation on how to realize their ideas at no additional cost.

This competition is aimed at helping students have a chance to implement their ideas, as well as see that they and their peers can achieve such feats. Stambaugh states, “this competition is a practical way that students can apply principles of innovation, creativity, entrepreneurship, and business in a project-based learning environment where they’re pitching a real idea that they’d like to get started.”

Likewise, Upton asserts that many young people often talk down their ideas and believe they have little value. He envisions the competition demonstrating to students that their ideas do have value and can be become reality. Of course, Upton too elaborates on the skills that will be sharpened by the Innovation Challenge. He asserts that it will help force students to really analyze their ideas and go through all stages of what an implementation would entail.

There will be two stages of judging: first, a preliminary set of judging, which will narrow all of the applications down to a final five. Then, these top five will have to present in front of a panel of judges and other audience. Three winners will be selected from the final five and awarded prizes of $10,000, $5,500, and $2,500, plus the aforementioned opportunities. Upton states that this is a “cash prize” and that winning students/teams will receive checks.

He clarifies that the money for this competition is not coming out of the college’s general budget, but rather, “The Innovation Challenge and Encompass Distinction are both being funded by the Sisco Fund for Enterprise Management….” Dennis Sisco, class of 1968 and Alexine Lesko were the donors for this fund.

On the criteria for judging, Stambaugh states that judges will follow a standardized rubric, considering factors such as creativity, product and service clarity, market potential, model sustainability, and “core principles on what makes a great business idea,” among others.

While applications are not due until March 24, Upton states that the participation is meeting and exceeding expectations for the first year. Various demonstrations of student interest have shown the potential for a decent turnout. Moreover, Upton asserts that he and his colleagues hope that more students will be inspired to participate after seeing their peers do so. He hopes to have the presentation event of finalists packed.

The Innovation Challenge is slated to become an annual event at McDaniel. The presentations of the five finalists will take place on April 11 from 6:30 to 9:30 p.m. in the Forum.