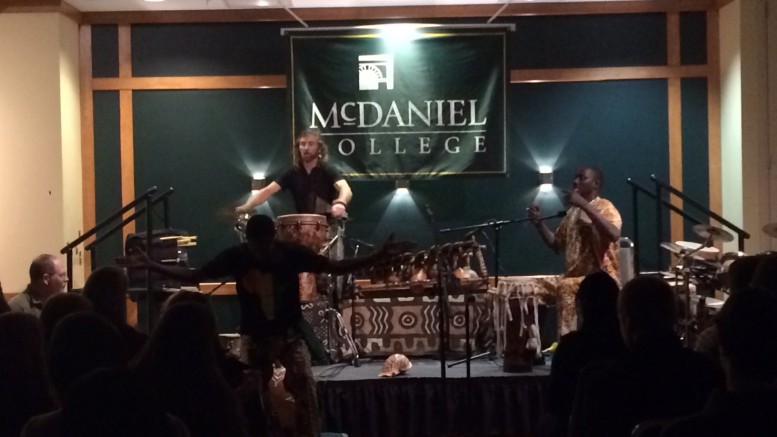 The ensemble Rhythm Griots in the Forum. Photo by Emma Carter

The Forum saw quite a cheerful and lively night on March 2.

McDaniel welcomed the Rhythm Griots: a unique, talented ensemble whose music is drawn straight from the sounds and culture of West Africa. Senegalese Massamba Diop and Abdou Sarr and American Tony Vacca make up the group.

The Rhythm Griots opened their performance with a twinkling of chimes, just scratching the surface of the infinite and intriguing sounds they could make with their plethora of drums and drum sets. The room was soon filled with loud, sophisticated beats and rhythms from all types of drums. Their fast-paced and spirited music was exciting – every song sent energy buzzing around the room. 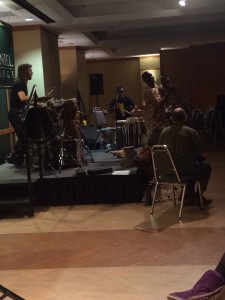 The musicians were just as exciting to watch as the music was to hear, too. Diop, with a small drum under his arm throughout the night, was all smiles during the show. He enthusiastically added shouts and yells to the songs, and often called on the audience to clap and yell along. Everyone joined in happily, and naturally. Sarr excited the audience with his energetic dancing, along with his fast and fun-to-watch drum playing.

Vacca made the audience listen. Several of the Rhythm Griots’ songs featured his meditative, poetic lyrics. These were backed by complicated but not overbearing drumbeats, or by his own strumming of the kora, a traditional African stringed instrument. His songs called for using technology for good to “bring your minds to peace,” and explained the philosophy that cities aren’t the riches of the planet: the beautiful country is. In his last song, Vacca told the story of peace and love as a couple; “they are so good together.”

Audience members made their way to the front of the room to dance all throughout the night, some pulled up by the performers and others happy to jump out of their chairs. One member of the audience pulled up by Diop was Dr. Mohamed Esa, who danced along like a true good sport.

The Rhythm Griots brought a colorful night full of new sounds and lively culture to McDaniel. Their music inspired dancing, joy, and togetherness. The audience slowly meandered out after the last song, left with the group’s final thought: “the world is made of rhythm.”