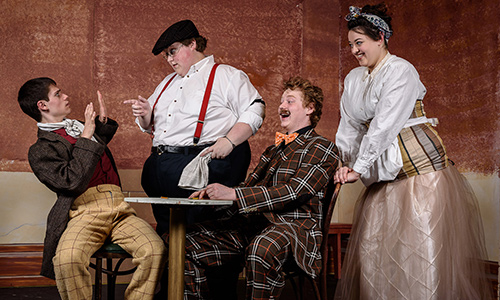 A scientist and an artist walk into a bar…

While that may seem like the beginning of a bad joke, it actually happens in Picasso at the Lapin Agile, the latest production by the McDaniel Theatre Department.

Written by Steve Martin, this one-act comedy details the happenings when two young, brilliant minds, Albert Einstein and Pablo Picasso, meet at a bar, the Lapin Agile, in France in 1904.

The setting is perfect since in 1905, Einstein published The Special Theory of Relativity, and in 1907, Picasso painted his famous Les Demoiselles d’Avignon. Both of these works are discussed in the play, as Einstein and Picasso are on the verge of creating and finishing them.

“We needed a contemporary comedy,” director Gené Fouché explained about the selection of this piece. “I was looking for something that had more of a research aspect behind it. [This play] gave us the opportunity to research how art changed from being more realistic into modern art.”

Though the production is based on historical fact, Martin intertwined his clever, witty humor and brought each character to life.

“I like [the play] because it’s very funny,” Fouché said, “but it’s also a very smart comedy. It’s not just silly humor. A lot of it is based on real events. It’s a really interesting piece for us.”

Picasso, played by Andrew Frascella, tends to be overdramatic when it comes to discussing women and other artists, evident in multiple outbursts throughout the show. Fouché said that this was a key role since this character “drives a lot of the play in the second half.”

Einstein on the other hand, played by Bryan Bowen, is more calm and collected in his search for a female, but is quick to defend himself when his intelligence is questioned. When he finds something funny, his reaction alone sends the audience into hysterical laughter.

“I wanted [the actors] to really think about physical comedy, and movement-wise what that meant for the characters,” Fouché explained, adding that even though there isn’t a lot of physical comedy, it is effective when used.

“I think it’s a great sendoff for some of our seniors,” said Fouché. She explained that while it will be sad to see them go, she is looking forward to working with the underclassmen coming up the ranks.