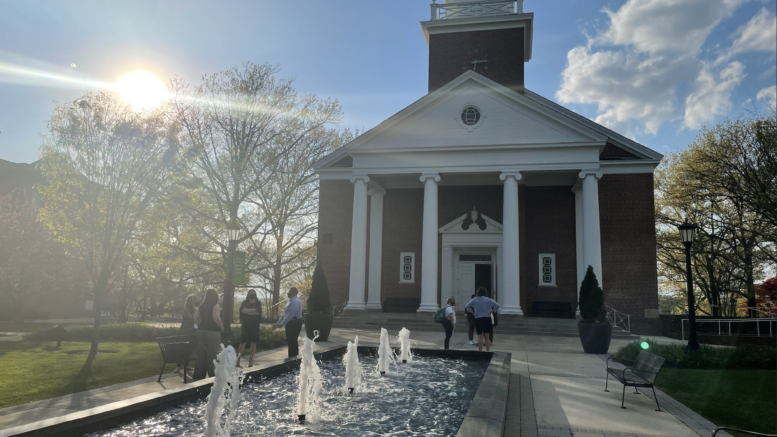 On Tuesday, April 20, at around 2:30 p.m., it was announced that the jury on the Derek Chauvin trial had reached a consensus.

In anticipation of the results of the Chauvin trial, McDaniel’s Diversity, Equity, and Inclusion administrative task force held a call to deliberate on responses to the trial’s potential outcomes. While on the call, they got the news that the verdict would be read in court. They departed from the call to hear the results live.

McDaniel’s DEI task force reunited for a meeting to decide what to do in response to the results of the trial.

Elizabeth Towle, Dean of Students, said “We came back on knowing that everyone has processed and has a different reaction to this whole George Floyd tragedy. We thought, okay, we know it’s short notice, but let’s just give students a safe place to come and process their feelings or be with other people who are maybe feeling the same way, just to be around others in case that would help them to feel better and feel more supported.”

After the Chauvin verdict was announced, Towle called Aaron White, SGA’s president, and they decided to postpone the Ask McDaniel Anything event that was originally scheduled for Tuesday at 6:00 p.m. and encourage students to attend the gathering at the fountain.

At 5:35 p.m., students received an email from the President’s Office. President Casey wrote “All of us at McDaniel must view today’s guilty verdict as yet another call to action as we continue to make McDaniel a more just and equitable community. As members of that community, we can find solace in one another and the principles that bring us together.”

Casey’s email invited students to the McTeer-Zepp Memorial Plaza in front of Big Baker chapel to find comfort with one another and support from staff.

Towle said “in our journey as a community, how we deal with tragedy like this, it feels like we need a commonplace to do that. People have talked at different times about the fountain being that place.”

The small crowd at the gathering consisted mostly of staff members and administrators from residence life, the office of student engagement, the office of diversity, equity, and inclusion, the first stop office, academic life, the wellness center, campus safety, admissions, and the provost’s office. There were few students present.

The atmosphere was quiet and consisted mostly of casual conversation between students, staff, and administrators. Some administrators shared their experiences of being on campus during the O.J. Simpson trial, where the nation was similarly gripped to news outlets, waiting for the results of the intense trial.

“While there hasn’t necessarily been a lot of conversation about Derek Chauvin and the verdict, it seems like it’s still a good opportunity for members of the community who want to, to be together. And that’s what the point was,” said Towle.

Towle speculated that the Ask McDaniel Anything will be rescheduled to some time in the next week, potentially next Tuesday.