We at the Free Press were deeply saddened to hear of the passing of Jeannie Vogel, owner of Jeannie Bird’s Café on Main Street. Her death has certainly had an intangible effect in the community of McDaniel and of Westminster on the whole.

Jeannie was an inveterate supporter of the students, faculty and staff of McDaniel College, and, especially, a true friend of the Free Press. Her support for our paper went above and beyond what we ever expected or asked; it was inspiring, it was meaningful, and it was a true act of dedication and caring on her part.

The hole left with her passing is large, and it leaves us faced with the incomprehensible. She passed before her time, and while on her way to the business she and her husband had built not only for themselves, but also for the community around them. How can such things be comprehended? 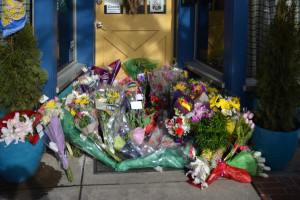 By midday on Saturday, Feb. 20, a memorial formed outside of Jeannie Bird’s. Photo by Kyle Parks.

In this moment I am reminded of the famous monologue delivered by President Bartlett in the television series The West Wing (the full scene, for those interested, can be found here) . His friend and colleague, Mrs. Landingham, has too been taken before her time; he stands in the National Cathedral and, to the alter asks:

“Am I to believe these things from a righteous god, a just god, a wise god?”

Now perhaps you may be of a more secular persuasion, or may not believe in an Abrahamic god; I intend to offer no judgment, nor any suggestion that your views are any less valid than my own. But no matter what your beliefs, you can understand what he is asking: how can such things happen to such noble and goodhearted people?

I have no answer to this question. I do not believe any of us do, nor will we ever be able to comprehend the magnitude of such existential quandaries. We now are left to mourn, to cope and heal from the loss that we have all suffered. But we are also offered the opportunity to celebrate the life of a woman who dedicated her life to enriching the lives of every person who walked the streets of Westminster.

And so we at the Free Press offer our condolences to her family, to her friends, and to the community of which we are a part, which has suffered a truly terrible loss. We also raise a glass to a woman who, in her time on this earth, enhanced our lives and the lives of many who we deeply care about.

We will continue to ensure that McDaniel students are aware of the ways in which they can pay their respects to Jeannie, as well as how they can help preserve her memory through their deeds and words. She is survived by her husband, Bernie Vogel, and her three children.