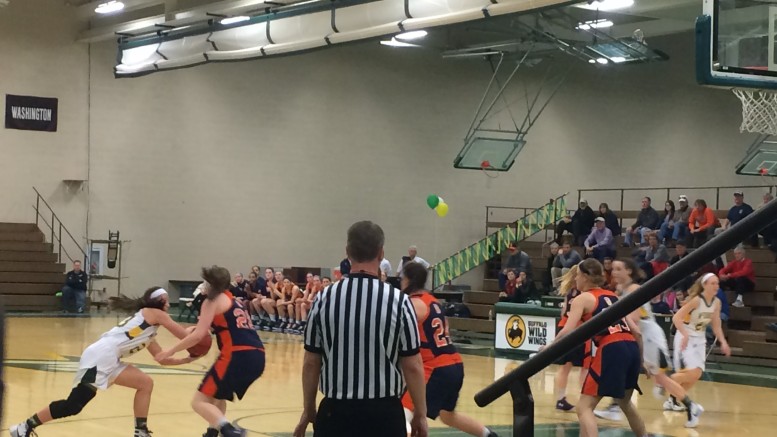 The Green Terror got off to a strong start in the first quarter, taking a 10-2 lead in the first 50 seconds. Nichols scored eight of those points, sinking a pair of 3s and free throws, while Zeps made a layup.

Halfway through the first McDaniel was still up, 18-7, thanks to continued efforts from Nichols and Zeps. The Bullets started their comeback in the final minutes of the quarter, ending the period down just 20-23.

The Bullets finished their stomping of the Green Terror in the first half, taking a 38-33 lead at the start of the break.

The Gettysburg lead grew at the start of the third quarter with layups from Emily Gibbons and Jessica Porter. A series of missed shots from McDaniel and continued consistency from Dorshimer left the Green Terror down 46-54 at the end of the third quarter.

McDaniel threatened a comeback during the fourth, coming within six points multiple times. Strong efforts from Nichols and Zeps brought the Green Terror within five, 64-69 with 38 seconds left in the game, but the Bullets’ lead was insurmountable.

“We just came up short. You look at our shooting percentage and we just didn’t shoot well,” said McDaniel coach Becky Martin. The Green Terror shot 34.9 percent on field goals, while the Bullets went 50.9 percent from the field.

Martin also mentioned that the team failed to capitalize on turnovers as much as they usually do, despite the fact that they scored 20 points off of the Bullets’ 24 turnovers. McDaniel was forced into 12 turnovers.

“[We] didn’t make Gettysburg work as hard on offense as we had in the past, so we gotta clean that up,” Martin said.

With a win on Saturday McDaniel would have clinched the top spot in the conference and won the hosting rights to the Centennial Conference Championship.

“We’ve got the best fans in the conference here, [and] it would have been nice to do this at home,” said Martin.

The two teams will meet each other again on Friday, Feb. 26 in the Centennial Conference semifinal match at Muhlenberg in Allentown, Pennsylvania. Game time is to be announced.