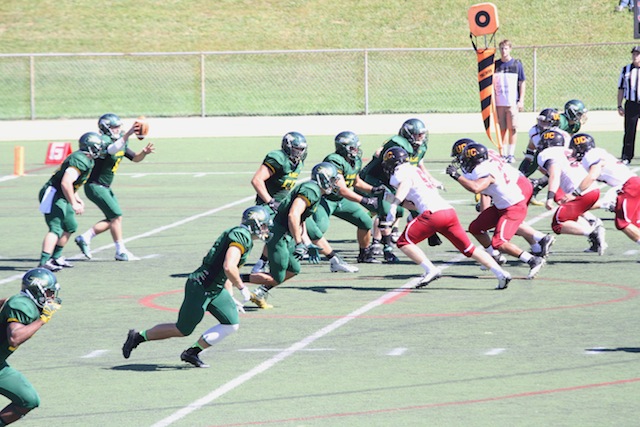 Ursinus started off with a 35-0 lead in three quarters. They eventually would win 42-13 in a Centennial Conference football match-up against McDaniel on Saturday.

Ursinus quarterback, Kevin Monahan 11-22 and collected 150 yards passing against McDaniel. The real damage was done with his arm in a short passing attack. Monahan threw an 8-yd TD pass to Nick Lundholm with 5:54 left in the first quarter. However, Monahan threw a 56-yard TD to Matt Raymond to get the lead to 21-0 with 5:03 left in the second quarter. He threw another TD pass to Ron Armstead with 4:20 left in the third quarter to take the lead to 35-0.

Corey Kelly led the Bears in rushing with 145 of their 260 yards. Taylor Paul added 98 yards on 13 carries. They rushed for a touchdown. Kelly rushed for a 7-yard TD with 11:34 in the second quarter. Nick Pustizzi also had a 2-yard TD run with 10:16 left in the third quarter. Taylor Paul had a 9-yard rushing TD in the fourth with 5:08 left to go.

The fans seemed to get a little antsy over the lack of scoring. They also voiced their displeasure with the referees during the game. This is the second week in a row that this has happened. One has to wonder if this is going to become a recurring theme for the McDaniel Green Terror.

McDaniel will play at Gettysburg on Saturday. The game time is slated for 1 p.m.