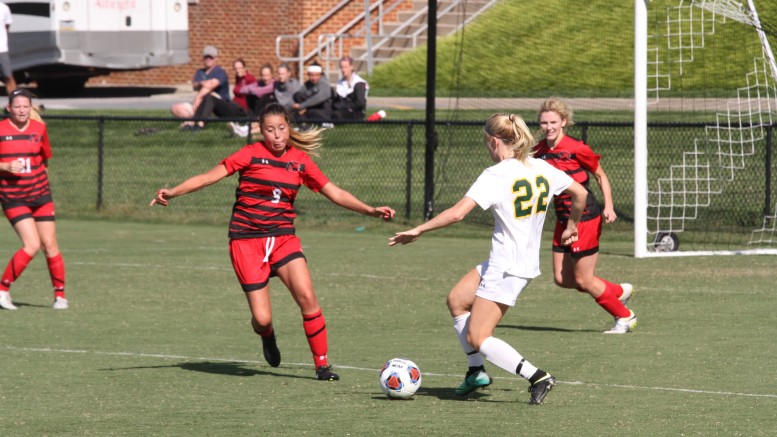 Kirsten Gibson battles for the ball during McDaniel's 1-0 shutout over Albright on Saturday. Photo by Atticus Rice.

Women’s Soccer narrowly defeated Albright Saturday in Westminster thanks to a game-ending double overtime header from Kirsten Gibson that found the back of the net late to give the Terror a 1-0 victory.

The sophomore’s second goal of the season came seconds after her fifth shot of the game was blocked by Albright (1-3) goalie Alexis Tunney. Gibson charged the rebound and headed it into the net for McDaniel’s (3-1) single goal, ending the 104-minute battle.

“The older I get as a coach, the less I stress because I realize it’s not in my hands, it’s in my players’ hands,” said Head Coach Sandy Lagana following the game. “What I told [the team] at the end of the game is that I knew after the second half going into overtime what type of team I had today because the really good ones find a way to win and they did. I’m proud of them.”

McDaniel out-shot Albright 19-4 and held the advantage on corner kicks 6-4.

For the second game in a row, the Terror held their opponent to zero shots on goal and fewer than ten shots combined.

The first half was largely dominated by the Lions’ offense where they accumulated all four shots and four corners. McDaniel wouldn’t show strength until the second half when they posted a 5-0 edge on corners and 9-0 edge on shots.

“I like to think the wind wouldn’t have played that much of a factor,” said Lagana about the first half. “If you don’t have the ball at your feet then the wind does play a factor and so I thought the second half we got a little help from the wind and just kind of settled in. I thought they were able to turn it around.”

Gibson led the Terror attack with six shots and her one goal while freshman Maddie Schwartz added five shots to the mix and senior Abbie Keen contributed three of her own.

Albright’s offense was led by Erica Bross with two shots on the day.

Tunney held the visitors’ defense with 10 saves in goal.

The close-call victory was the first game of overtime play for McDaniel in this short season, but not something that Lagana views as a bad thing.

“I maybe would have not liked to endure that long of a game,” she said following Gibson’s header, “but I think sometimes handling adversity early in the season can be better.”

The win comes as the team’s third in a row following a season-opening loss against William Smith on the first of the month. Since then, McDaniel has won three games in eight days, two by a 1-0 score.

McDaniel returns to action at home against Frostburg (1-3) on Wednesday at 4 p.m. for their final pre-conference game before opening up Centennial Conference action at Ursinus (0-3-1) on Sept. 16.

“They’re playing a style that I want to be playing and we’re trying some new things which means we’re going to fail some more in hopes that long-term it helps us,” said Lagana.