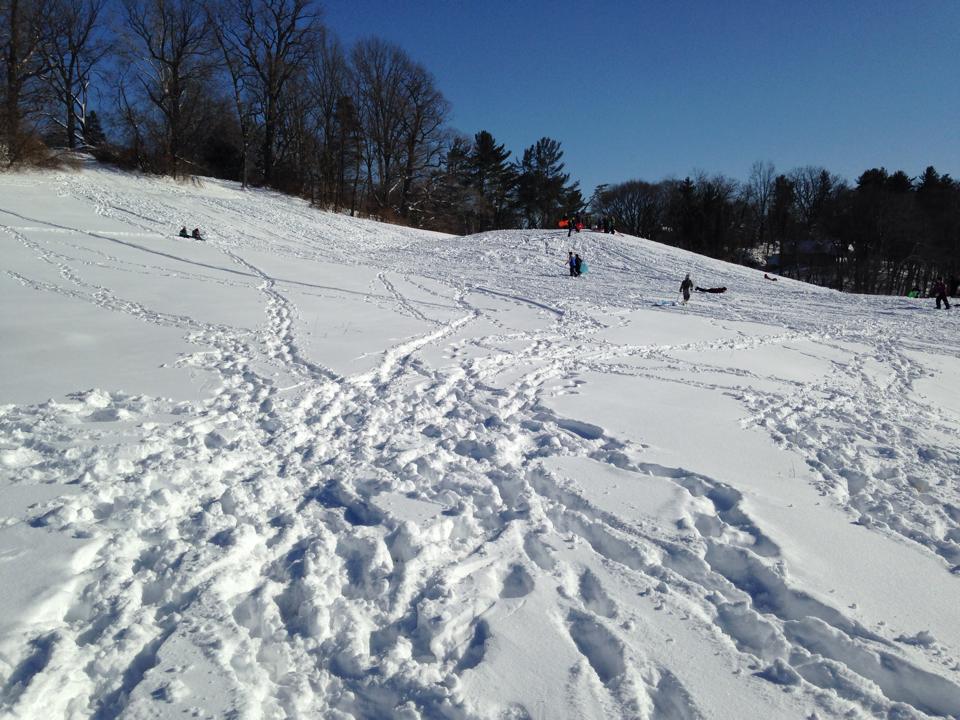 McDaniel's golf course is a popular place for students and Westminster residents to go sledding. Photo by Evan King.

When it snows on campus and classes are canceled, there’s still plenty of fun things to do on the Hill. Many students like to cozy up in their dorms, taking naps, drinking hot chocolate and watching Netflix, but some prefer to take the fun outdoors. Students will build snowmen and occasionally have snowball fights, but without a doubt, the best activity to do on a snow day is to trek over to the golf course and go sledding.

All bundled up and ready to face the snow days, many McDaniel students rush over to the large, powder-covered hills that overlook Safeway and Baugher’s to race down on their sleds, enjoying their day off. Though all sorts of students join in on the fun, many them are student-athletes. This poses an interesting question: Do student-athletes stop and think about the possibility of hurting themselves when they go sledding?

“No, getting hurt has never crossed my mind,” says first year student Logan Seitz, a member of the baseball team.

Many student athletes are in season, so one injury can ruin their season and have them sitting the bench permanently. Yet it seems as though students are more worried about the possible outcome of a race than the possibility of spending the rest of the season watching from the sidelines.

Even athletes who choose not to go sledding have an opinion on the matter.

“I think it looks fun, though I have never done it, but I think athletes shouldn’t be told they aren’t allowed to [go sledding],” says junior Tim Lassaro, a member of the golf team. He added, “It doesn’t even look dangerous,”

The fact that McDaniel is a Division III makes it relatively easy for student-athletes to go sledding, even if there are potential risks.

“We are not Division I, so we do not require letters of intent with hundreds of requirements and restrictions,” says Athletic Director Paul Moyer. “Students opt into our program and can obviously choose not to participate at any time. We therefore only ask they choose to ‘do right’ when making decisions about their conduct, being prepared to compete and taking care of themselves.”

Moyer thinks the athletes should “have a high quality experience” and be allowed to be “normal” students.

The joyriders on the sleds don’t only have themselves to think about when risking the slide down, as their coaches may have feelings about it as well. Most of the coaches are very strict on what to do and what not to do when it comes to the safety of their players. However, none of the coaches have rules that forbid sledding.

First year student Marcos Mercado, a wrestler, says, “Coach [Davey Blake] probably wants us to be careful and not get hurt but we still do it anyway, and when we think that, ‘yeah we could get hurt,’ we think about how much fun sledding is going to be and we go anyway.”

Clearly, a lot of people think sledding on the Hill is fun and part of the McDaniel experience. Just remember to be careful if you choose to partake in it — especially if you’re an athlete.