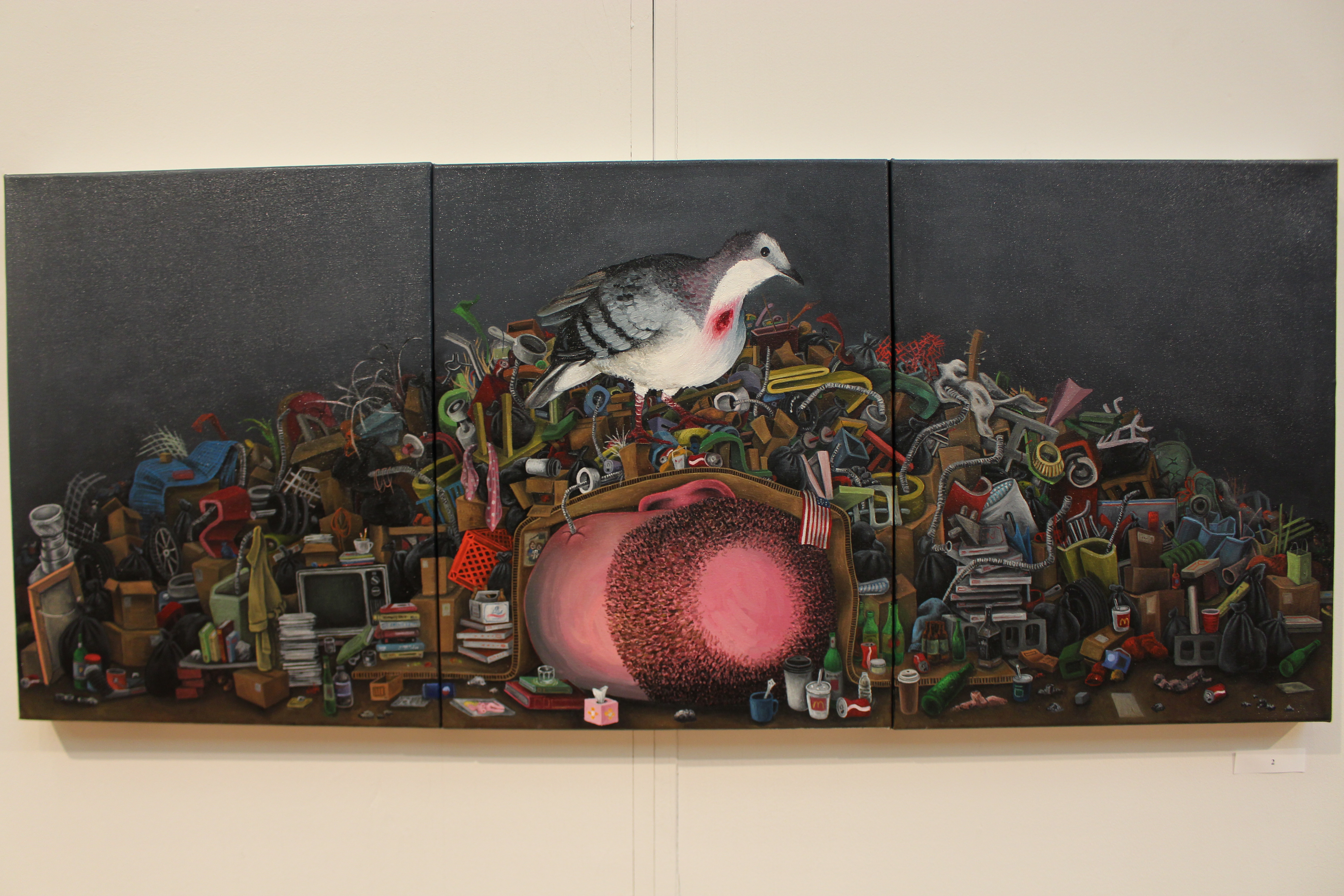 Darkness abounds on the top floor of Peterson Hall. “BLACK: Paintings by Brian Cirmo” is the current exhibit in the Rice Gallery, featuring 13 pieces almost totally covered with black paint, with minimal areas of lightness. The exhibit began on Feb. 26 and will be on display until April.

During the artist talk on Feb.26, Cirmo stated that the first painting he did in this collection is Sun Loather, partly inspired by the song “Sunloathe” by the band Wilco. The painting, postcards of which can be found in the Rice Gallery, features a man illuminated solely by thin strips of light shining through what appear to be the gates of a fence. Cirmo describes how the “bespectacled, bearded, and slightly balding” man in this painting – who resembles Cirmo himself – went on to become the protagonist of his paintings in “Black.” 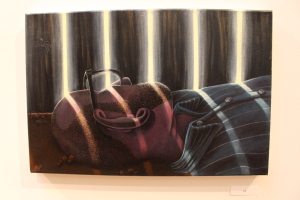 “Beneath the Bare Lightbulb” by Brian Cirmo

Beneath the Bare Light Bulb (left), a large painting made up of eight smaller pieces, was inspired by Notes from the Underground by Fyodor Dostoyevsky. Wounded Pigeon (above), which features an injured bird resting atop a man’s head, connected to and surrounded by a large pile of garbage, was inspired by the novel Sabbath’s Theater by Philip Roth – specifically a scene about a homeless man being pestered by a pigeon. Cirmo also discussed how An Apple A Day (below) was inspired by the passing of his father. While he resists labeling his paintings as “autobiographical,” he does not deny the influence his life has on his work. 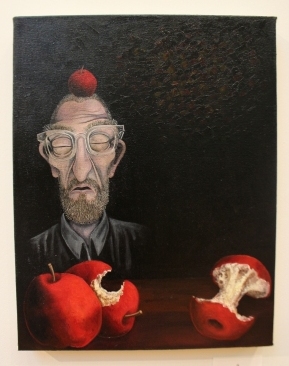 An Apple a Day by Brian Cirmo

In his artist statement, Cirmo, a New York resident, discusses his past decade of travels around the United States to “museums, large cities, small towns, national parks, civil war battlefields, assassination sites, graveyards and national monuments,” and how his interest in American music, history, literature, western painting, film, comic strips and cartoons all came to influence his artwork. He cites figures from Woody Guthrie to Jack Kerouac as inspiring him to participate in “the conversation of American artists and raconteurs.”

Cirmo has a BFA from The College of Saint Rose and an MFA from the State University of New York at Albany. His work has been featured in many galleries, including the Massry Center for the Arts, the Juergensen Gallery, the Hyde Collection Museum and the Albany Institute of History and Art. His art has also been published in Gambling the Aisle Magazine and Studio Visit Magazine.

All of Cirmo’s paintings are oil on canvas. They are also available for purchase from $350 to $3600.