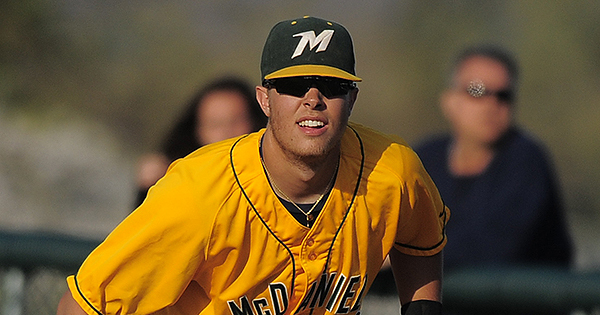 The road to the Major League is full of twists and turns. For McDaniel alum Marshall Betts, the hope is that the East Coast League is a stepping-stone that will eventually land him a contract from a Major League affiliate.

Betts graduated from McDaniel last May, finishing his Green Terror career as one of the top hitters in program history, compiling a .319 career batting average with nine home runs and 89 runs batted in, and totaling only 34 strikeouts over his four year career.

He embarked on his journey into professional baseball shortly after graduating, trying out for and signing with a team in the independent United League. The league, in central Texas, features only four teams. However, Betts, who got a late start and only appeared in ten games with the Brownsville Charros, hit .357, and, for the first time since high school, was tasked with pitching in addition to playing in the field. The Charros, managed by former MLB player Ozzie Canseco, ended the season 24-49, but Betts was not deterred and set out to find another contract.

Betts says that his McDaniel baseball experience was invaluable. “I was able to play all four years and get my reps. It allowed me to continue to improve on my game.” He enjoyed it so much that he returned to McDaniel as a volunteer assistant coach for the fall 2014 offseason to not only impart wisdom to  his former teammates, but also to stay around the game. While here, he was able to hone his game by using his access to the facilities and field.

This winter, Betts signed a contract for the summer with the Old Orchard Beach Surge, in Old Orchard Beach, Maine. The East Coast League, another small, independent league, also features two teams in upstate New York and three in Canada.

Betts says he hopes to improve on his game from last summer and parlay that into a professional contract.

The Fastest Sport on Two Feet: A Look Inside Lacrosse

Upcoming Home Games You Should Attend