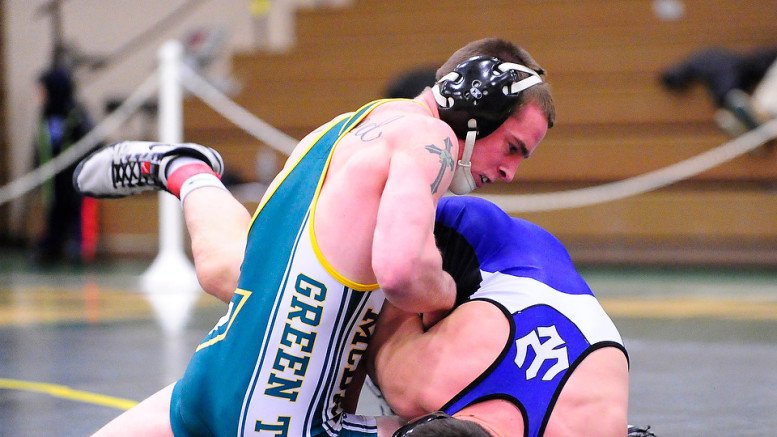 No. 4 ranked Messiah defeated McDaniel in non-conference wrestling action on Wednesday night at the Gill Center, 37-15.

After earning his 100th win at the Centennial Conference Championships on Feb. 13, senior Ryan O’Boyle headlined for the Green Terror yet again with a first-period fall at 133.

O’Boyle also won his third conference championship on that day.

“The fact that I achieved both accomplishments in the same match made it that much more gratifying,” O’Boyle said.

He also spoke to the funny story that surrounded his 100th win.

“After winning my semis match, I actually thought that that was my 100th win and [I] was pretty proud of it,” he explained.

At 125, the Falcons’ Lucas Malmberg started the match by pinning McDaniel’s Jake Rendelmen, giving Messiah a 6-0 lead. O’Boyle recorded his fall, which was followed by teammate Alvontae Drummond earning a forfeit win at 133, giving McDaniel a 12-6 lead.

McDaniel’s Eric Meyer responded with three points of his own, holding on to a 6-5 victory in the final period of his contest.

The match finished as Kyle Koser beat McDaniel’s Jake Pooton 18-2 at 197, and Taylor Avino lost the heavyweight set to Nick Havener from a pin.

One of the major highlights from Wednesday for O’Boyle was “celebrating [the] last match [he’ll] ever wrestle at home with all the people who have showed love and support for [him] throughout [his] entire career.”

A truly special career it has been, O’Boyle looks forward to his future opportunities and to “cashing out his wrestling bank.”

The Green Terror will return to action on Saturday, Feb. 27 at 11:00 a.m. at the NCAA Division III East Regional at Washington and Lee.