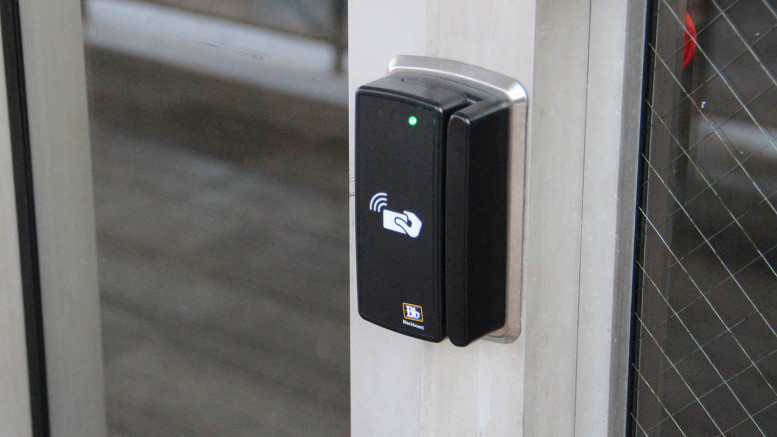 Students living in Daniel MacLea, Rouzer, and Whiteford Halls will soon be using their McDaniel 1Cards to enter their buildings. Over Jan term, the College began installing the card access system, thanks to a private donation.

The system is expected to go live once the final programming elements are synced with the College’s existing operations.

“We had a training for Residence Life and Campus Safety staff [on Jan. 29],” said Michael Robbins, associate dean of students and director of residence life and student engagement, “and there are  still a few programming elements in the system for access levels and planning out how to merge our normal business operation with the card access system.”

Resident Assistants will be using the new system when conducting rounds rather than a master key, according to Robbins.

While students will continue to use physical keys to enter their individual rooms, they will begin using their cards to gain access to residence buildings once the system is live, according to Chief Information Officer Andrew Lawlor.

“Installation of the [card access system’s] hardware is complete,” said Lawlor. “We are now working on refining the configuration of the system software so that it will operate based on our requirements, and testing to confirm the settings are correct. As such, we have not yet identified the go-live date, but will make an announcement to those residents in advance.”

Both Robbins and Lawlor pointed to the safety benefits of the electronic access system, which include cameras and an alert system connected to Campus Safety.

“[Video monitoring] can assist with tracking down parties responsible for different incidents,” Robbins said of the video cameras that will be pointed toward the doors of residence halls.

Campus Safety will also receive alerts from the system if a door is left propped open, and officers will be able to unlock doors electronically without being present at the residence hall.

Lost keys will be less of an issue, too.

“A lost key would no longer grant access to a building even after a room door lock core is changed,” said Robbins.

The video cameras and controllers, where the card access info is stored, are in the building attached to the campus network, according to Lawlor. This will help keep the system live in the event of a network outage.

Robbins anticipates little trouble from the new system: even in the event of a power outage, the Office of Residence Life has arrangements with a locksmith to minimize the problem of building access, he said.

The card access system is manufactured by the same vendor that provided students’ ID cards, which makes for a compatible and well-designed match, according to Lawlor. He said he expects longevity from the system and room for development, making it possible for students in future classes to use the technology.

“This system was selected with the future in mind,” he said, “where it will be capable of also reading cards by tapping them to the reader, or mobile phones with near-field communications technology.”

“It will be more convenient for the students who live in Rouzer, so they don’t have to carry their keys everywhere they go,” said Andrew Witten, a first-year student who lives in Rouzer Hall. “I know I have forgotten my keys in the past when I was heading to [football] practice or class, and I had to wait to be let into the building, which was not enjoyable.”

Robbins also noted changes on the Residence Life side of break closures and move-in day.

“When we have a break,” he said, “we can change the access levels of the building without the locksmith needing to go in and manually change out all the lock cores. On move-in day, we could do something like setting a window of time from 8 a.m. – 1 p.m. where the doors are not locked so students and parents moving in don’t need to worry about propping doors or keying in. But then at 1 p.m. the doors could have the locks auto-re-engage.”

Given that the project was privately financed by a donor, the College does not have other buildings in mind to receive the upgrade.