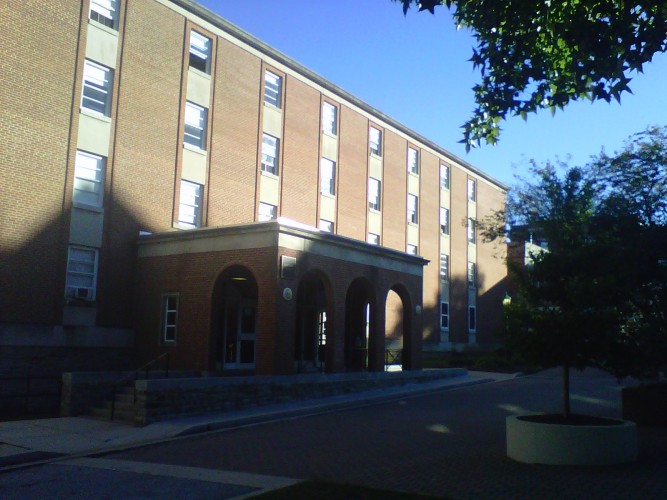 The Living Learning Community Pilot Program, a new initiative involving three First Year Seminar classes that live together on the fourth floor of Rouzer Hall, aims to prove that living and learning together help students academically and socially.

According to Dean Beth Gerl, Vice President of Student Affairs, the program features the collaboration of Student Affairs and Academic Affairs where everyone works together including peer mentors, professors, and resident assistants.

Gerl explained that this is not a new idea that McDaniel College is adopting because this is a program that has been done on other campuses around the nation.

The selection was based on registration. Gerl said that whoever signed up for the three classes that were included in the LLC Program automatically got placed into it. Then, each student got a notice in their email notifying them that they were part of the program.

According to Gerl, even though it is a great commitment to be part of this program, these three professors were immediately interested in participating.

“I think that LLC is an initiative that we all hope for,” said Breslin, Acting Associate Dean of Student Academic Life. “Students learn together and socialize together.”

Dr. Robert Kachur, chair of the Department of English, has done first year seminars for many years so Student Affairs and Academic Affairs asked him to be part of the program.

Kachur said that the students are doing really well, they are friendly with each other, and they feel very comfortable.

“There is a group spirit in the class,” said Kachur.

Kachur also explained that more than changing the way they teach, this program provides opportunities for professors. It offers new spaces to teach in, like a remodeled lounge, which is just for students in the program, and another office space that professors share with each other. Both are located on the 4th floor of Rouzer Hall.

Dr. Gretchen Kreahling McKay, Chair of the Department of Art and Art History and Associate Professor of Art History, explained that her class is perfect for this program because living together facilitates the discussion between her students since they have constant contact in their living space.

McKay said that her class consists of each student taking the role of a historical figure and they have to make decisions based on their character about the discussion they have in class that particular day in teams.

According to McKay, she has been teaching this FYS class since 2007. She feels that this is the most engaged class she ever has had because of the LLC Program.

Students from Dr. McKay’s From Chaos to Compromise class talked about how much they love living and learning together.

Julie Doyle said that Dr. McKay has been like their mother since the beginning of the program.

Mike Gallagher said that living in Rouzer Hall is fun because they get to walk across and talk to people. Rick Rickman said that they can hang out in and outside of class.

LLC Program is where “everyone loves everybody,” said Aaron Bryant.

According to Michael Robbins, Director of Residence Life, the new lounge has a TV on the wall with a Portable DVD player. They also have a white board and strips of cork all around the room to put up any ideas students have or if professors want to hang something there.

Gerl explained that they have a calendar where professors can reserve the common room and do activities for their students or for the three classes together.

Rouzer was the best place to start this program, explained Robbins, because it has the advantages of having two bathrooms in each wing, so that each of the different wings’ bathrooms could be for the opposite gender.

According to Robbins, students are not necessarily rooming with someone in their class; the purpose of this program is to have the three classes all live together on the same floor.

Robbins said that for this program, Residence Life assigned two residence life assistants on the floor for extra help, while usually there is only one assistant per floor.

There are 48 students who are part of the LLC Pilot Program plus two resident assistants. They also have five commuters in the program, so each of the commuters was assigned a key to go into Rouzer.

Peer mentor and senior, Teal Koch, an English major, from Dr. Robert Kachur’s Horror in Fiction and Film class, explained that she is having fun and she is very happy with this new opportunity of being part of the LLC Pilot Program, since this is her first year working as a peer mentor.

“It’s such a unique experience for the students involved and they are so much more connected than any group of First Years I’ve seen before,”  said Koch.

Though Koch does not live in Rouzer, she has a key so that she can do activities in the lounge area with her mentees. They did a film screening and they plan to hold more classes and events in that space.

Gerl said that the committee decided to make the LLC Pilot Program with as few students as possible because it is very easy to evaluate at the end and see the pros and cons of the program.

At the end of the year, Gerl explained, Academic Affairs and Students Affairs will be evaluating the students by asking them questions or for feedback about the program to do an analysis of what were the outcomes of this program, how can they work on it, and how can they expand it in the future.

According to Gerl, this was the perfect time to start this program because the freshmen dorms were becoming co-ed and McDaniel has the advantage that freshman students have a designated freshmen dorm.

“It is not a true living learning community when the men and women are separated by dorms,” said Gerl.

Beyond the living space which includes the new lounge and office space, there is even a Facebook page where all of the students and faculty members are involved, thus  creating a constant connection between students.

Of these continuous efforts to connect students, Gerl stated, “People think that students stop learning when they walk out of the classroom; you know that’s not true, you know that you continue to learn even after class.”